RETURNING TO THE GREAT INDOORS?: If the Lancers get key dates from Blue Cross Arena, they will play in MASL 2

Well, there is little doubt that the Rochester Lancers and Lady Lancers will be back next year in their respective league.

But what of the indoor Lancers?

That team, which went into hiatus after the 2015 Major Arena Soccer League season due to workman compensation costs, is primed to return to the second division of the league, MASL 2, Lancers owner Soccer Sam Fantauzzo says.

“We’re not going to be playing division one this coming year,” Fantauzzo said Wednesday night. “We may play division two just to keep the foot in the door and keep the sport alive.”

The Lancers competed in the Major Indoor Soccer League and then the MASL from 2011-15 when the high price of workman compensation forced the team to move to the sidelines. The outdoor Lancers men participated in the National Premier Soccer League while the Lady Lancers played in United Women’s Soccer.

Whether the Lancers will return this year — the season kicks off the first week of December — depends on what dates the Lancers can play at the Blue Cross Arena in downtown Rochester, N.Y.

When the team inquired about playing slots for the 2017-18 season, it was presented with weekday dates and games on NFL Sundays. The Lancers had hoped BCA would free up a couple of weekend dates it had been holding for possible concerts.

Perhaps things will change this time around.

MASL 2, which is a developmental league, has fewer games on the schedule than the first division.

“It’s less dates, which is easier to accommodate us,” Fantauzzo said. “It’s probably six dates instead of 12. We have the local players, we have the Lancer players that would love to do it. Hopefully, we can bring in a couple of former star players and kind of keep the fans interested. But that’s probably going to happen, unless something crazy happens. I think it looks like we’re going to have an MASL 2 team for the year if we get some dates.”

Fantauzzo said that the team was waiting to schedule another meeting with Blue Cross Arena officials. Then the Lancers would work with MASL vice president of business development Kevin Milliken in joining the division two.

Last year the Lancers explored the possibility of bringing back the indoor team but could not find a suitable facility that checked all the boxes. Those possibilities included The Dome in suburban Henrietta, the ice hockey rink at the Rochester Institute of Technology and Blue Cross Arena.

The Eastern Division will include Utica City FC, which moved from Syracuse. A club is set to become the first Canadian team in the MASL, playing in Mississauga’s Paramount Fine Foods Centre. The Harrisburg Heat and three-time defending champion Baltimore Blast round out the division.

A pair of Florida sides, the Florida Tropics and Orlando SeaWolves will join the Milwaukee Wave, Kansas City Comets and St Louis Ambush in the South Central Division.

In the Western Conference, the Dallas Sidekicks will return to the fold, re-joining their fellow Texas side, the Monterrey Flash, in the Southwest Division along with the El Paso Coyotes and RGV Barracudas.

The Pacific Division will include the Ontario Fury, San Diego Sockers, Tacoma Stars and Turlock Express.

The regular season will kick off the weekend of Dec. 1.

“The formation of rivals takes many forms. Some are geographic, and some are born from historic clashes,” MASL commissioner Joshua Schaub was quoted on the league website. “We believe the divisional line up put together provides our fans with the ability to see rivalries renewed and new ones formed. In addition, it provides flexibility to leverage the best dates possible for fans to access their favorite teams.”

Fantauzzo might have an update or two about the Lancers’ indoor team on his weekly radio show, Kick This!, which is on WHAM-AM 1280 Saturdays from 11 a.m.-noon ET. That program usually is followed by another Fantauzzo-produced one-hour show, Word on the Street.

You can listen to it here: 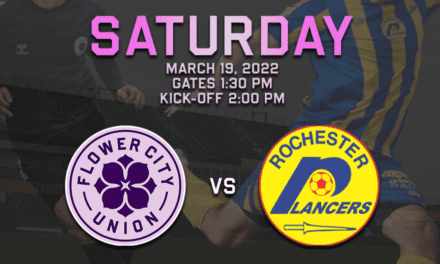