With the United States and Mexico looking ahead to for their international friendly in Nashville, Tenn. Sept. 11, FrontRowSoccer.com is looking back at some of the most memorable matches between these two archrivals. Today, we journey way back to 1937 when they met in Mexico City for the first time.

Three years after the United States posted a stunning 4-2 win over Mexico in the very first meeting between the two North American neighbors, El Tri hosted the Americans in the Castillo Najera Cup over two-week span in Mexico City in 1937.

In fact, it was the USA’s first international games since 1934.

The results foreshadowed what was going to transpire over the next half century or so — domination, total domination.

The USA was managed by Elmer Schroeder.

The team traveled by boat to Mexico, leaving New York on Aug. 26 for the competition, which began on Sept. 12.

All three games were played at Parque Asturias.

In the first match at on Sept. 12, 1937, the Mexicans romped to a 7-2 triumph, although one must look at the game summary top understand what probably transpired before a reported crowd of 21,000. Entering the 65th minute, the hosts had scored but once, bursting out for six tallies over the final 25 minutes. Since the USA played in rather unusual conditions — the rarefied air in the high altitude of Mexico City for the first time, that could be the reason for the late match collapse.

Jose Lopez had scored the first of his two goals in the eighth minute. It wasn’t until the 65th until Manuel Alonso celebrated the second goal as the Mexicans started to pull away. Francisco Arguelles found the net for the first of his two 10 minutes later before striking again three minutes later. Horacio Casarin scored in the 85th minute, followed by Alonso (88th minute) and Lopez (89th minute).

Alex Rae, who led the American Soccer League in scoring in 1936 with 28 goals while playing for the Newark Germans and who performed in three international matches, and John McEwan, a Syracuse University standout who played for Brooklyn Celtic, scored for the USA.

Exactly a week later at the same venue, Mexico almost duplicated the result in a 7-3 victory in front of a reported crowd of 22,000. El Tri had scored only twice by intermission — a pair of quick strikes by Casarin (39th minute) and Alonso (40th minute) before the dam broke in the final 45 minutes.

Casarin scored in the 49th. Alonso completed his hat-trick with goals in the 59th and 66th minutes. Luis Garcia added a single tally in the 62nd and Arguelles closed out the scoring for the hosts in the 75th.

McEwan connected against for the Americans, added by a George Nemchik goal and an own goal. Nemchik was a member of the U.S. 1936 Olympic team who performed for the Philadelphia German-Americans.

The three-game set was mercifully completed on Sept. 26 in a 5-1 win by the hosts. Familiar names celebrated goals for Mexico, which again broke away in the second half. This time Garcia recorded brace with goals in the 13th minute and 35th minutes. Efraim Ruiz bagged two goals within a two-minute span in the 62nd and 64th minutes and Arguelles, in what became a tradition in the three matches, completed the rout in the 74th minute.

There have been no exact attendance figures available for that match.

An interesting note: all three matches were officiated by Mexican referees. While that probably did not influence the outcome of the matches, that certainly would not happen today, not even in friendlies.

Those results started a rather unwanted tradition of American losses in the Mexican capital and throughout their southern neighbors. It would not be until 1997 when the USA even managed a point — in the cauldron called Estadio Azteca.

But that’s another story for another time that will be tackled later in this series. 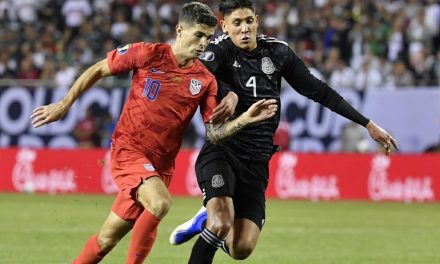