BRIDGEVIEW, Ill. — Tobin Heath and Alex Morgan scored one goal and assisted on another as the United States women overcame a one-goal deficit to register a 4-1 victory over Brazil and win the 2018 Tournament of Nations at Toyota Stadium Thursday night.

The Americans (2-0-1, 7 points) needed at least a two-goal triumph over the South American side to win on goal differential because Australia, 2-0 winners in the first game of the doubleheader, also had a 2-0-1 mark and 7 points.

“This is definitely a great confidence booster,” said Rose Lavelle, who scored the U.S.’s first goal. “We played some great teams.”

Against the run of play, Brazil that struck first via a counterattack from Debinha. U.S. defender Tierna Davidson attempted to clear a cross that instead deflected into the back of her own net in the 16th minute. WATCH

Lavelle leveled the match in the 33rd minute before a crowd of 18,309. WATCH

The Americans took control of the match in the second half, striking three times.

“I think we knew we couldn’t take our foot off the pedal,” Lavelle said.

Midfielder Julie Ertz slid home a Heath cross from the right side at the far post to give the hosts a 2-1 lead in the 53rd minute. WATCH

“A brilliant service,” Ertz said. “I was trying to do everything I could to keep it in play.”

Eight minutes later, Heath found the scoresheet herself, taking a Morgan feed and smashing an 18-yard shot for a 3-1 advantage to give the U.S. its precious lead over the Aussies. WATCH

Morgan tallied her 90th career international goal in the 76th minute, tapping in a Megan Rapinoe free kick for the final goal of the night. WATCH

In the 90th minute, Morgan was forced out of the match after she rolled her ankle, needing a stretcher to take the striker off the field. It seemed she was feeling better during the medal ceremonies as she walked up to receive her gold medal without any help.

The U.S.’s next big tournament will be the CONCACAF Women’s Championship from Oct. 4-17, which will serve as the qualifying tournament for the 2019 Women’s World Cup in France.

Woman of the Match: Megan Rapinoe 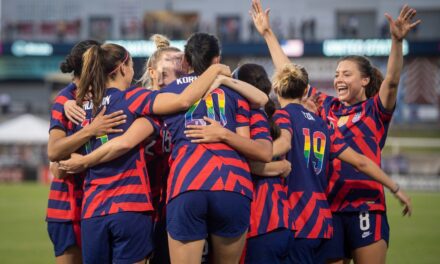 A GOOD TEST: USWNT will play at Spain on Oct. 11