A HAPPY RETURN: Heath scores game-winner for U.S. in 1st game back since injury

CLEVELAND, Ohio – Tobin Heath returned to the U.S. women’s national team in style, scoring the winning goal to lift the United States to a 2-1 win over China PR Wednesday night.

Playing in her first game since September, second-half substitute Heath tallied in the 75th minute to break a 1-1 deadlock before a crowd of 12,335 at First Energy Stadium.

The 30-year-old midfielder, who underwent surgery in January to correct an ankle injury, scored her first goal since 2016.

The Americans used a first-half headed goal from Megan Rapinoe and responded quickly with Heath’s game-winner after China PR had equalized in the second half.

Press, who got her first start of 2018 and had both assists, became the 37th female player in U.S. history to earn 100 caps.

The victory gave the U.S. a two-game sweep of China, which already has qualified for the FIFA Women’s World Cup. China came out a bit more aggressively than it did on June 7 in Sandy, Utah, pressing the USA higher up the field, but still did well to stay compact in the defensive half while challenging the hosts to find a way through. The U.S. outshot China 16-9, but had to work very hard to create dangerous chances.

The opening goal came from quick series of passes that got Press free on the right flank. She sent the ball across the far post for Rapinoe to finish with a header in the 35th minute.

China equalized in the 71st minute on a swift counter attack as Li TingTing got behind the defense on the left side and raced into the penalty area before playing a square pass to the unmarked Li Ying, who rolled it home.

Ashlyn Harris made a spectacular save in the 74th minute, pushing away a free-kick that was headed into the upper right corner. Then Press connected with Heath – a 64th minute substitute — on the opposite end for the game-winner a minute later.

The next action for the Americans will come at the 2018 Tournament of Nations, featuring the U.S, Brazil, Australia and Japan. The round-robin tournament will be comprised of three doubleheaders that will be played on July 26 in Kansas City, Kansas, July 29 in East Hartford, Conn., and Aug. 2 in Bridgeview, Ill.

Woman of the Match: Christen Press 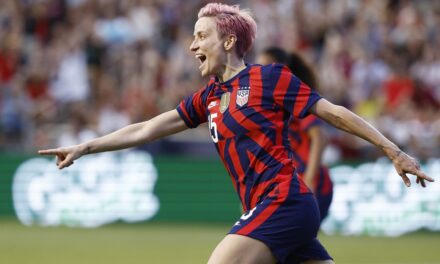