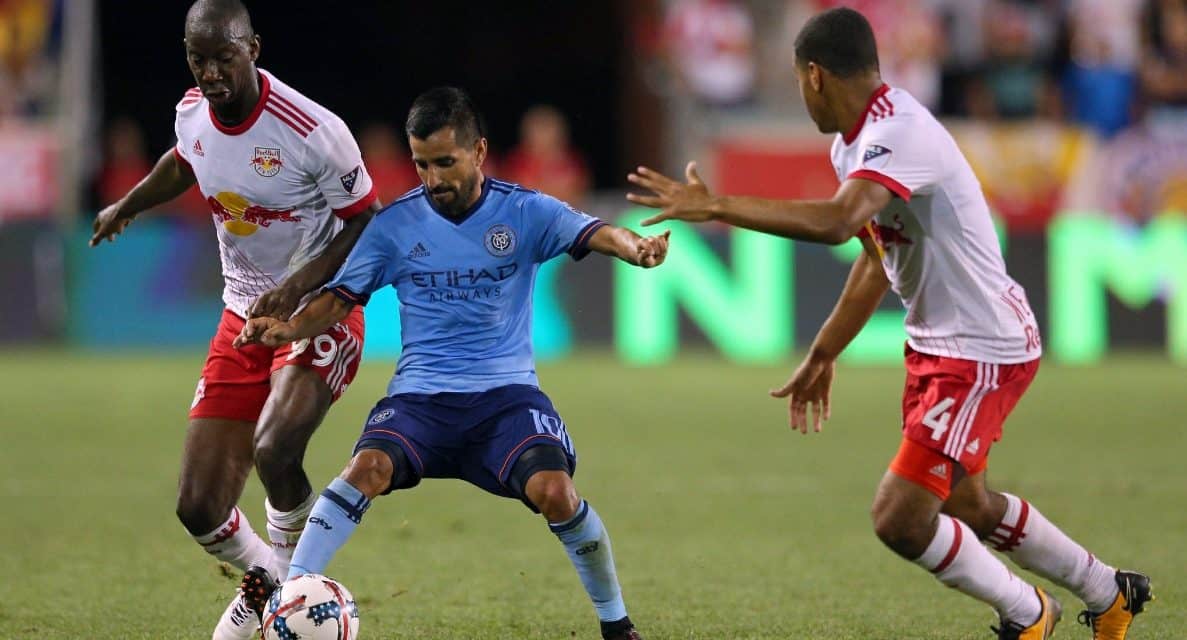 When the Red Bulls and New York City FC walk onto the Red Bull Arena pitch Saturday, it will mark the 11th time these two archrivals will meet in the Hudson River Derby the past four seasons.

With 10 previous confrontations — some memorable ones — it is time to update ranking of the various Hudson River Derby matches.

Villa connected for his first Major League Soccer hat-trick, including the game-winning penalty kick in the 75th minute, to power City to a 3-2 victory over the Red Bulls in the latest edition of the Hudson River Derby at Yankee Stadium.

The 2010 World Cup winner was at his best with the game on the line, striking twice within a three-minute span in the second half to turn the game on its head With the Red Bulls enjoying a 2-1 lead, the 35-year-old Villa took over in front of a soccer capacity crowd of 33,679.

In the 72nd minute he beat goalkeeper Luis Robles at the near right post to equalize at 2-2. After Sal Zizzo fouled him in the box for a yellow card, Villa drilled a penalty into the lower left corner for the game-winner in the 75th minute (Zizzo was sent off for accruing his second yellow card in the 90th minute).

No one saw it coming. Not the Red Bulls and certainly not NYCFC. I mean, how many times do you see soccer games include seven goals, let alone one team scoring them all as the visitors? Again and again and again, the Red Bulls’ press forced NYCFC into mistakes and into goals before a crowd of 37,848 at Yankee Stadium. A Bradley Wright-Phillips goal in first-half stoppage essentially broke City’s back with a three-goal halftime bulge. Dax McCarty headed home two goals, BWP had another and Alex Muyl, Gonzalo Veron and Gideon Baah scored their first goals for the Red Bulls. In the history of the derbies in the world, the scoreline is one of the most confounding.

“It was a disaster for us. All bad. All bad,” Villa said. “The best thing about this is we only lost three points. This was our worst day. The only thing we can do is forget the day, forget the game.”

Jesse Marsch had another take.

“Incredible performance,” he said. “A bunch of guys on the field who wanted to express how much they wanted it. And it’s been a tough start of the season for us, no doubt. But I felt like in all ways we wanted to go out and make this a performance that we can hang our hat on, that we can say, ‘Now we’re turning a corner. It’s a big game. And we’re going to do everything we can to put it on our terms.’ “

A little more than a month after the other debacle, City restored some of its dignity with a vital home shutout at Yankee Stadium before 33,613 spectators in its lone win to date. Jack Harrison and Villa tallied for the hosts, who salvaged one game in the series.

Every derby needs a little controversy. Well, on this day, there was a lot of controversy. Let’s see if we can put it in a nutshell without breaking the internet. Prior to the match, Marsch complained about how the Red Bulls were not getting calls from referee. City head coach Patrick Vieira was ejected from the match in the 34th minute because he had left the coaching box. Vieira claimed that Marsch’s comments set up referee Mark Geiger to call the third and final match of the derby in the hosts’ favor. He and ripped into his RBNY counterpart after the match. And oh yes, before we forget, BWP scored twice — again, and Ronald Zubar and Sacha Kljestan added one apiece. Tommy McNamara connected for NYCFC before 25,218 spectators at RBA.

In the only there’s no tomorrow match of this rivalry, the Red Bulls got past City in the Lamar Hunt/U.S. Open Cup fourth-round encounter at Red Bull Arena. NYCFC dominated the first half, but a calf injury to playmaking midfielder Maxi Moralez turned the tide for the hosts in the second half. Daniel Royer struck for the lone goal of the match in the 77th minute.

The Red Bulls moved on to play and host the Philadelphia Union at RBA the next Wednesday. An interesting tidbit: this was the lone Red Bulls derby match in which Luis Robles did not guard the net. Ryan Meara, a member of City’s 2015, side, registered the clean sheet.

And this had the smallest crowd by far at 11,311. The Red Bulls, afraid of NYCFC fans filling up the stadium and taking away their home-field advantage, decided to price tickets at $65.

New York City FC came into the Red Bulls house Saturday and did what their Hudson River Derby rivals have done to them the past two years.

City dominated the MLS side at RBA.

Jack Harrison and Ben Sweat scored goals on either side of halftime as NYCFC recorded an emphatic 2-0 victory in the latest edition of the rivalry.

RBA has been nothing but a house of horrors for NYCFC, which had entered the game losing all four previous matches between the two teams here by a combined 9-2 score. That included a 1-0 elimination defeat in the Lamar Hunt/U.S. Open Cup June 14.

Goalkeeper Sean Johnson, who was not severely tested, recorded the clean sheet.

There’s a first time for everything and this was the very first derby confrontation. A curious crowd of 25,217 turned out at RBA to watch the Red Bulls register the win. Despite playing the final 56 minutes a man down after Matt Miazga accrued his second yellow card of the match, the Red Bulls still prevailed. Wright-Phillips started his scoring prowess against City with a brace — one goal in each half — offsetting Patrick Mullins’ score.

“It was a great feeling to score in a derby,” Wright-Phillips said. “It always is.”

A derby-record crowd of 48,047 packed Yankee Stadium to watch the Red Bulls continue their dominance. Wright-Phillips (two goals) and Chris Duvall connected on goals seven minutes into the second half after McNamara gave the hosts the lead. Miazga gave the Red Bulls some breathing room with a second-half score.

“We’re definitely excited about the three points, but to come against your rivals, especially with all the build-up that they’re trying to put into it, we understand that,” Robles said. “It’s marketing. It’s going to be good for the league. We’re on board with that. But we want to make a statement that we were here first and this is our turf and we’ll continue to defend it.”

New York City FC coach Jason Kreis’ frustration was never more apparent on national TV and on the replay screens at Red Bull Arena as he cursed to no one in particular after the Red Bulls scored the first goal of what turned into a 2-0 defeat Sunday night.

It was the third time in as many matches that NYC FC fell to its Hudson River rivals in as the teams concluded their first regular-season derby.

OK, back to the present. BWP found the net again, as did Felipe before 25,219, the largest derby crowd at RBA.

Oh yeah, back to Kreis, who was seen cursing when Wright-Phillips scored the first goal from point-blank range off a marvelous Kemar Lawrence feed in the 21st minute in which defender Jefferson Mena slipped trying for the ball.

“Their player fouled us, but [the referee] gave them the ball,” Kreis said. “It was a ridiculous call. It led directly to their goal. From my point of view, he was very poor tonight.”

Things usually have a way of evening themselves out at the end of the day.

On Friday night, that wasn’t the case for New York City FC and the Red Bulls in their 1-1 draw in the Hudson River Derby at Red Bull Arena.

There was little question the Red Bulls were the superior team. They outshot City 21-9. They held the ball for 61.9 percent of the time, although it seemed much, much more. They also hit the woodwork twice on either side of halftime.

Second-place NYCFC (14-7-5 47 points) knew it escaped with a precious road point, even if the visitors failed to keep pace with Eastern Conference leaders Toronto FC (15-3-8, 53).

“I will take the points. I’m really happy with the points,” Vieira said. “We played against a really good team that made it difficult for us.”

Despite their domination, the fourth-place Red Bulls (12-10-3, 39) walked out of RBA a frustrated side, knowing they deserved better in what turned into the first tie in the 10-game rivalry that has spanned three seasons.

“A draw feels like a big disappointment because of the way we played and the way we dominated most of the match,” Marsch said.