Man, how we quickly forget.

But then again, it easy to forget about New York City FC’s star player the way the team is playing.

Without team captain and striker David Villa in the Starting XI, New York City again demonstrated its superiority over all comers in MLS with its most comprehensive performance of the young season, a 4-0 victory over Real Salt Lake at Yankee Stadium Wednesday night.

Ismael Tajouri-Shradi, Maxi Moralez, Jo Inge Berget and Ebenezer Ofori tallied as NYC FC (5-0-1, 16 points) stayed undefeated as it moved to a four-point lead over idle Atlanta United (4-1-0, 12), which it will meet in Georgia Sunday. RSL fell to 2-3-1.

Villa, who started the match on the bench, hasn’t played in an exactly a month due to a calf injury.

Goalkeeper Sean Johnson was never severely tested as he registered the clean sheet.

What Petke saw was not very appetizing for the visiting side as NYCFC had its way with RSL before 18,603 spectators.

First, Tajouri-Shradi took advantage of an absolute poor clearance by the defense and powered a 16-yard shot past goalkeeper Nick Rimando for his fourth goal of the season and a 1-0 edge in the 12th minute.

“I mean, we’re on the road. I thought early chunks in the beginning, we did what we said we were going to do – which is get behind the ball, five across the middle to deny any penetrating passes,” RSL head coach Mike Petke said. “Force them long a bit. We didn’t really deal with the long balls to well and there it is. It was not good enough and they punished us.

Justen Glad took down Moralez at the top of the box and the diminutive midfielder ripped his ensuing penalty kick into the upper left corner for a two-goal advantage on the half hour for his fourth goal of the year.

Berget got on the scoresheet for the first time as a City player as he waltzed in and beat Rimando from close range for a 3-0 halftime lead.

“We played really well in the first half,” defender Anton Tinnerholm said. “We talked about a few things before the game, how we wanted to punish them and we did it quite well. We attacked them especially on my side, on the right. I had about 15-20 crosses in the first half so I was a bit tired after the first half but it was fun to play today because we showed a lot of character and a lot of quality, and we played the football we wanted to play. That’s the main thing, and I think that the first half has been the best half of the season.”

Villa, whose last appearance was in a 2-1 home victory over the LA Galaxy March 11, replaced Berget in the 59th minute.

NYCFC wasn’t finished as Ofori recorded his first goal for the hosts in the 70th minute. Moralez made his way to the end line and sent the ball out in front to the Ghanaian, who slipped the ball past Rimando for a 4-0 score.

Villa almost got into the act in the 78th minute as he got a step on the RSL backline and raced in on Rimando. However, the Spanish international apparently was a bit rusty as he pushed his shot wide right.

In the 85th minute, Villa came close again, but this time he shanked a shot wide left. 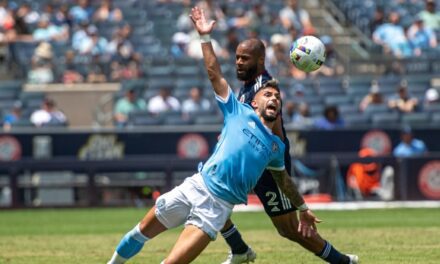