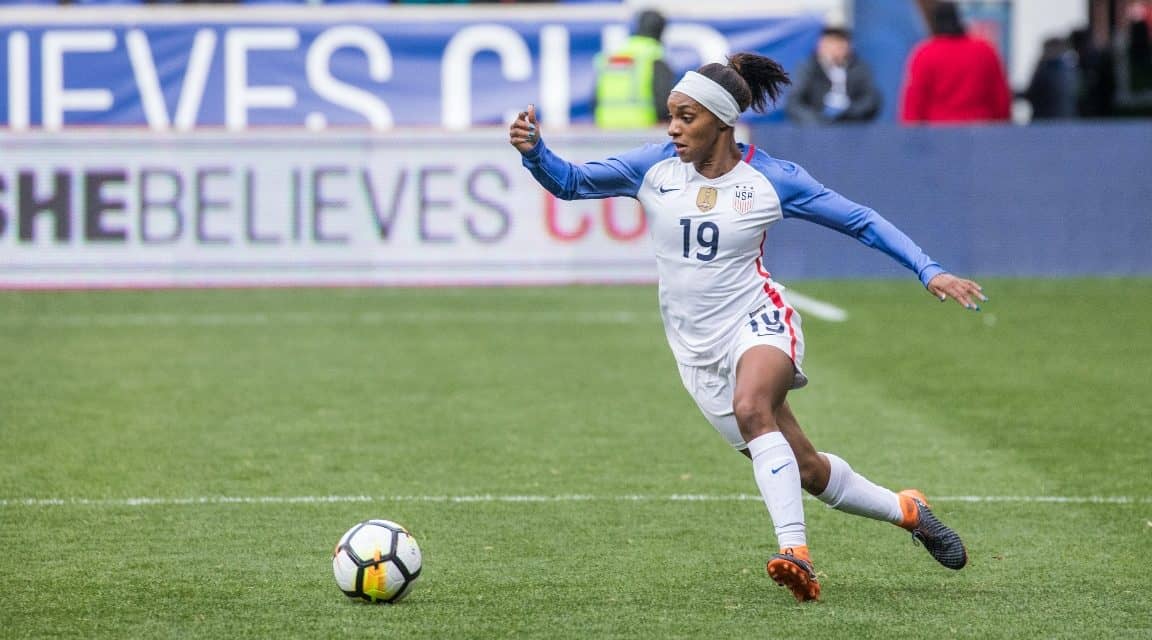 Crystal Dunn: “For me to jump into a season six, seven games in would have been kind of like a shock.” (Photo by Matthew Levine)

HARRISON, N.J. — When Crystal Dunn and the U.S. women’s national team completes their participation in the SheBelieves Cup in Orlando Wednesday night, the Rockville Centre, N.Y. won’t be returning to England to finish up the season with Chelsea.

Instead, she will report to North Carolina Courage training camp.

Her original agreement with the FA Women’s Super League side was to play until the end of the season, but Dunn figured that the right time to return home was prior to the National Women’s Soccer League season.

“Timing,” she said. “I just think personally it felt right. I wanted to start NWSL from the beginning. I didn’t want to play catch-up in a sense. Also, going from playing English football to play in the U.S. It’s going to take some transitioning. The style of play is definite different.

“So for me to jump into a season six, seven games in would have been kind of like a shock. I wanted to give myself some time to just transition. Technically, I’m going to be on my third preseason in a year. I just need that kind of mental break to get into it.”

Dunn returned to the states in midseason form.

“I personally feel really good,” she said. “I spent a good year in England, worked on me as a player and adding things to my game. It is different when I do have to come into camp. Everyone’s been in camp. I have to get adjusted to everything. This team makes things easy. We’re playing with good players so i just feed off them and they feed off me.”

In North Carolina, Dunn will play for head coach Paul Riley, Long Island resident. As a teenager, Dunn played for the Albertson Fury, where Riley is director of soccer.

“I’m really excited to go back to a familiar place,” she said. “Paul’s great. I’ve heard great things about him.”

“I actually have not played under him,” she said. “Everyone thinks so. He actually has never been my coach. He has lived in the same town as me. I know him on a personal level. I don’t know him as a coach to player relationship. It’ll be great. He has been really supportive of my career so far. I am looking forward to the season beginning.”

Whether it is for club or country, Dunn has become a valuable piece to the puzzle because of her versatility. She can play in the back, midfield or up front, although her forte was scoring goals as proven by being the NWSL’s Golden Boot winner in 2015.

In the U.S.’s 1-1 draw in the SheBelieves Cup at Red Bull Arena Sunday, Dunn came into the game as a forward, replacing Mallory Pugh in the 73rd minute.

Three minutes later, the Americans’ plans were upset as defender Casey Short was taken off the field on a stretcher with a leg injury. Instead of pushing for the go-ahead score, Dunn was moved to left back by U.S. national coach Jill Ellis.

“Story of my life, right?” Dunn said. “I just have to be prepared for whatever. A lot of players on this team have multiple roles. I’ve been that type of player my whole career. It’s normal.”

So, the speedy Dunn had to think quick on her feet in another way.

“I’m not going to lie,” she said. “I thought Shorty was going to be ok. Everyone was saying, ‘Crystal, you’re going to play outside back.’ And I said, ‘Yeah, yeah, for a couple of minutes. She’ll be back” and then I’m playing outside back now. It takes a couple of seconds to actually regroup, make sure you are set on all your roles defensively and then you go again.”

In fact, Dunn had to go against her natural instincts of getting into the attack. For example, on one corner kick play, Dunn was just outside the left part of the penalty area. It appeared a French player was going to obtain possession of the ball, she took several steps back to get into defending mode. As it turned out, an American player won the ball.

“I went into this game not prepared to play outside back so I didn’t have any conversation about it,” she said. “But that’s how the game goes. You’ve got to think on the fly and communicate with your teammates and hopefully they’re giving you some good information.”

It remained to be seen whether Dunn would play against England in the U.S.’s third and final cup confrontation in Columbus Wednesday night.

Ellis, though, said that she wanted to get Dunn back into the mix after missing the beginning of camp due to her Chelsea commitments.

“She comes in fit, match fit and ready to go,” Ellis said. “I am excited about to have Crystal back in.”

The U.S. coach obviously has liked her versatility.

“I think Chelsea started her out in the central in the nine [role],” Ellis said. “They moved her to the left side and then to the wingback. I think she has that in her tool box. What we need to see is to see more training and seeing Dunnie, how we look at that front three in terms of the diversity of movement and timing and what they bring. She’s a fantastic 1 v 1 player we want in the system and shape we play. Our wide players get isolated and at times. The ability to break things down individually is going to be good.” 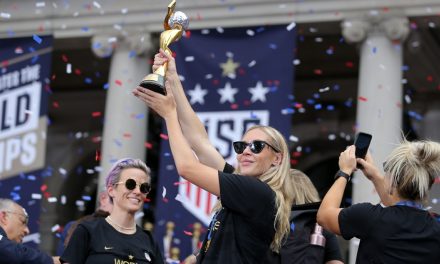 LONG’S OUTLOOK: LI soccer star at first was upset at LA burglary, but says everything can be replaced

ATTENTION COLLEGE PLAYERS: You can register now for the NWSL draft in January