Ronald Matarrita’s red card forced NYCFC to play short-handed for more than half the match. (Photo courtesy of MLS)

Playing more than half the match a man down after defender Ronald Matarrita was red carded, City could never find itself in the encounter, some 24 hours after playing the expansion Los Angeles Football Club to a 1-1 draw.

Ola Kamara, recently acquired from Columbus Crew SC, opened his account for the Galaxy in the ninth minute while newcomer Tomas Hilliard-Arce doubled the home side’s lead with a tally in the 70th minute. Baggio Husidic added a third goal in stoppage time.

NYCFC played down a man for 49 minutes as Matarrita was red carded for a tackle on Romain Alessandrini.

Since his team had played the day prior, City head coach Patrick Vieira changed up his Starting XI entirely, bringing in a fresh lineup, including new signings Brad Stuver, Saad Abdul-Salaam, Ismael Tajouri-Shradi and Jesus Medina.

The Galaxy attack dictated the tempo from the start, putting the visitors on the back foot. Los Angeles found its goal in the ninth minute when Alessandrini launched a rocket from beyond 20 yards that rattled the goal frame. The rebound then found Kamara, who leapt up and smashed a volley into the back of the net.

LA head coach Sigi Schmid opted for a full lineup change in the second half. New York started to find some rhythm, but the Galaxy nearly doubled its lead in the 59th minute when tidy build-up play by Sebastian Lletget and Ethan Zubak ended with the midfielder firing his shot into Stuver’s hands.

The hosts added to their lead in the 70th minute when Baggio Husidic launched a cross that found the head of Hilliard-Arce, who nodded into the back of the net. The goal was the first for the Galaxy’s No. 2 overall selection in the 2018 MLS SuperDraft.

Husidic capped off the game with a stoppage time goal after keeper Andre Rawls could only parry Alex Mendez’s shot into the midfielder’s path.

HAMSTRUNG: Tajouri-Shradi to be evaluated in New York 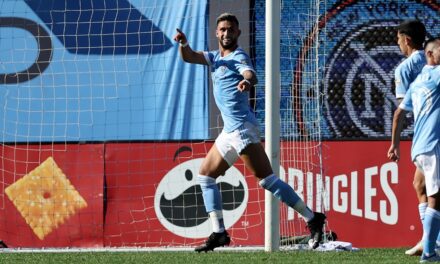