The awards were voted on by team management and a league-wide media panel that included representation from every USL market. Voting was conducted following the conclusion of the regular season.

Restrepo led the league with 12 shutouts and finished second with a 0.80 goals-against average. His 76.4 save percentage was the highest of any goalkeeper to log more than 2,000 minutes in the regular season.

“I’m extremely humbled by this award, and I’m thankful to everyone who helped make this a reality,” Restrepo said in a press release. “I want to thank my coaches, teammates, and the front office for always pushing me to be better. This award is the result of the hard work done by everyone at SAFC. I also want to thank the fans for always being there for us and having our back.”

Restrepo was a new arrival in San Antonio at the start of this season, bringing experience from the Colombian and Venezuelan first divisions in addition to his time in the United States.

“As a club, we are really pleased that Diego has been recognized as the goalkeeper of the year,” said SAFC head coach Darren Powell said. “He was the last line of our team defense in which all the players contributed to this year. Diego brought 100 percent effort in training & his game performances showed that in how he earned this award.”

Goalkeeper of the Year: Diego Restrepo

Coach of the Year: To be announced Monday

Defender of the Year: To be announced Tuesday

Rookie of the Year: To be announced Tuesday

Most Valuable Player: To be announced Wednesday

PUSHED BACK: USL training moratorium extended to May 3 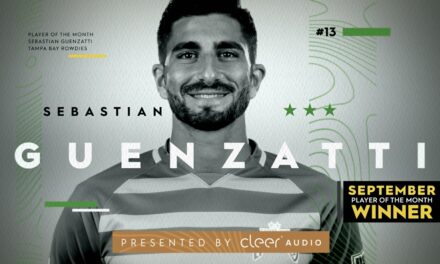