Melia, a graduate of East Islip H.S., put together his strongest season in 2017, leading the league with a 0.78 goals-against average and 78.4 save percentage among goalkeepers to make at least 15 regular-season appearances.

His 10 shutouts also ranked second in the league.

“Thank you @mls for this tremendous award,” Melia said on Twitter. “It is a true honor to receive an accolade such as this. Thank you to all the countless teammates, coaches, staff members, family and friends that made this possible!”

Born in Great River, N.Y., Melia graduated from East Islip High School. He played his college soccer at SUNY-Oneonta and Lynn University. He also performed for the Long Island Rough Riders in the Premier Development League.

While Melia’s season was shortened late this year with a hamstring injury, it did not diminish the impact he had for Sporting this year. Kansas City’s defense led the league, conceding the fewest goals this season with 29. It was the third-lowest total since the league’s 34-game regular season format.

He played a crucial part in Sporting’s run to the Lamar Hunt/U.S. Open Cup crown. He shone with two saves in a shootout to defeat the San Jose Earthquakes in the semifinals Aug. 9. Melia anchored Sporting’s defense for a 2-1 win over the Red Bulls on Sept. 20 to earn the championship. It marked Melia’s second Open Cup crown with Sporting, following up his 2015 title.

Melia became the organization’s third MLS goalkeeper of the year recipient, joining the ranks of National Soccer Hall of Famer Tony Meola (2000) and Jimmy Nielsen (2012). Sporting is the first MLS club to have three different goalkeeper of the year award winners. The San Jose Earthquakes have claimed the honor three times, with Pat Onstad winning twice.

Allstate Goalkeeper of the Year Winners:

MLS PLAYER OF THE WEEK: Chicago’s Nikolic (hat-trick) wins it

A SUNDAY TV DOUBLEHEADER: Red Bulls at Toronto, then NYCFC at home vs. Columbus 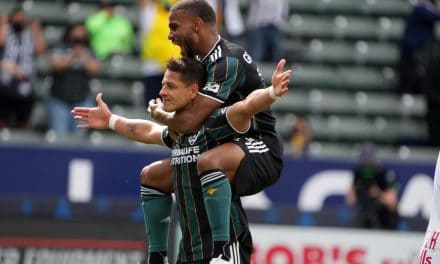 AND THE SUN ALSO RISES: Chicharito named MLS player of the week again