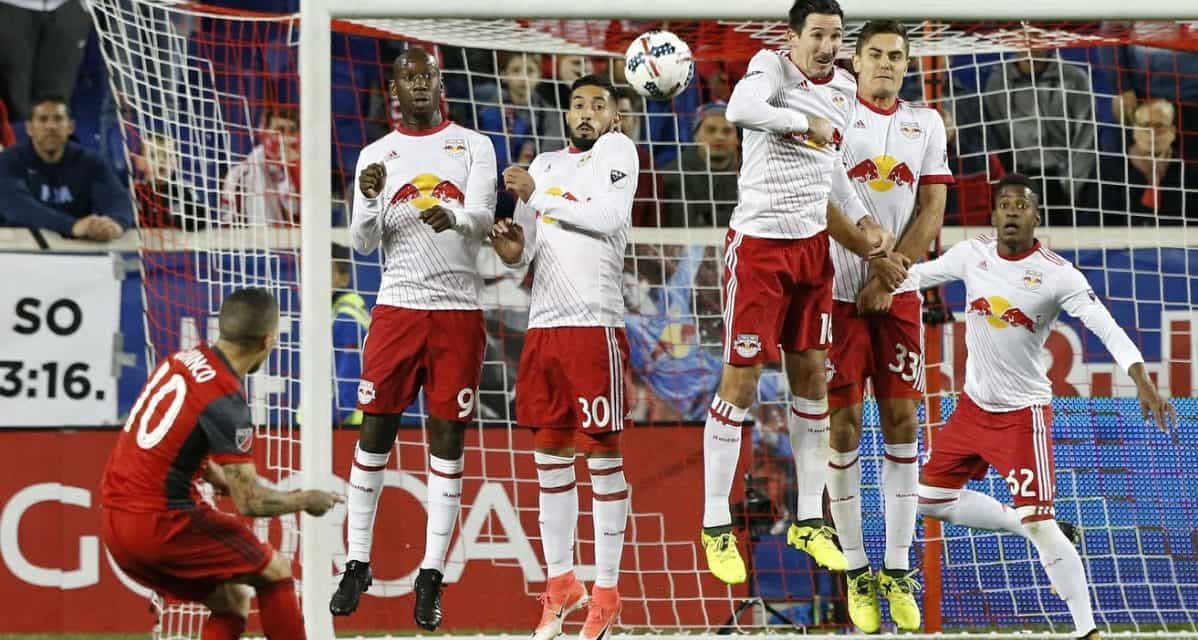 Sebastian Giovinco launches his game-winning free kick against the Red Bulls. Notice that Michael Amir Murillo (62) is on the right side, though he was supposed to be guarding the left post. (Noah K. Murray/USA TODAY Sports)

HARRISON, N.J. — Remember Where’s Waldo, those children’s puzzle books where they had to find the aforementioned character in a maze of people and things?

Well, the Red Bulls unveiled yet a soccer version of that called, Where’s Amir? As in where was defender Michael Amir Murillo on the most important play of their 2-1 first-leg loss to Toronto FC in the MLS Eastern Conference semifinals Monday night.

He wasn’t where he was supposed to be — guarding the left post — on Sebastian Giovinco’s 25-yard free kick in the 72nd minute at Red Bull Arena.

Murillo was supposed to be guarding the left post on Giovinco, who is the best free-kick taker in Major League Soccer. But something went awry. As the Red Bulls set up up their four-man defensive wall, he scampered back to the left post, but to no avail. He did not get there in time as the Italian striker swung his set piece into the corner.

“Unfortunately, he dropped too late,” Kljestan said. “Otherwise, if he’s there, he easily heads that ball out. That’s the little details that annoy me.”

Those little details turned into a big, big goal for Toronto FC, which could decided the aggregate-goal series. The second leg is set for Toronto Sunday.

“We wanted to build a smaller wall with guys in the box and maybe blur the line of slight and then we drop Amir,” goalkeeper Luis Robles said. “Amir was simply just dropping and timing and doing his best to get to the near post and even with that.

“Maybe Amir was a little late, slow to react, but of course this guy has the ability to put the ball over the wall so cleanly and so low and its the most amazing part. It doesn’t go up too high and doesn’t clear the wall by much. It’s ridiculous.”

Kljestan said he did not think the defensive wall mattered.

“I told them they had to jump as high as they could and he still put it over our head,” he said. “We had a guy who’s supposed to be on the line and able to able the ball out. The ball entered the goal mid-height, so if he’s there, he heads the ball out. It’s unfortunate. It’s the details, especially in the playoffs.”