TAKING ON A BEAST OF THE BIG EAST: St. John’s women visit No. 15 Georgetown Sunday

QUEENS, N.Y. – The St. John’s University women’s kick off Big East play when they travel to Washington, D.C. to face No. 15 Georgetown Sunday at 1 p.m.

The Red Storm enters the game at 4-4-1 after dropping a 1-0 decision to Long Beach State.

Since 2007, St. John’s is 6-3-1 in Big East openers and has won its last four matches to begin league play. Each of those 10 matches have been shutouts, with the Johnnies outscoring their opponents, 11-5, during that stretch.

Junior Christina Bellero continues to find her name near the top of many offensive categories in the conference, as the Melville, N.Y. native is third in the league in goals (4), fourth in points (10) and shots (25) and fifth in points per game (1.25).

Throughout the week, the Red Storm has been showing support for athletes and coaches of all orientations by wearing rainbow colored laces. Play with Pride is a new initiative from the United Soccer Coaches developed by the association’s LGBT Coaches and Allies Member Group. From Sept. 18-24, players and coaches from across the nation have been encouraged to wear rainbow laces during practice and competition and use the hashtag #PlaywithPride to promote their team’s commitment to diversity and inclusion via social media.

Georgetown (6-2-1) is coming off a 2-0 win over Towson in its last outing. In the most recent national polls, the Hoyas check in at No. 15, 12 and 13 in the United Soccer Coaches, Top Drawer Soccer and Soccer America rankings, respectively.

Georgetown is led by Rachel Corboz, who was a semifinalist for the MAC Hermann Trophy last season in addition to being named to the NSCAA All-America and All-Northeast Region first teams. Corboz, who was also named the Big East preseason offensive player of the year, leads the conference with 12 total points off four goals and four assists. Caitlin Farrell ranks second in the league with five goals. Defensively, Georgetown is led by goalkeeper Arielle Schechtman, who has posted seven clean sheets in nine games.

Sunday’s match between St. John’s and Georgetown will be the 19th meeting all-time between the two programs. The Hoyas hold a 9-6-3 advantage. The Red Storm and Hoyas have met four times over the past three seasons, most notably during the semifinals of the Big East Championship at Belson Stadium in 2014. The most recent meeting came last season when the Johnnies played then-No. 6 Georgetown to a scoreless draw, the Red Storm’s best result against a top 10 team in program history.

Sunday’s and Thursday’s games will be carried over the Big East Digital Network. 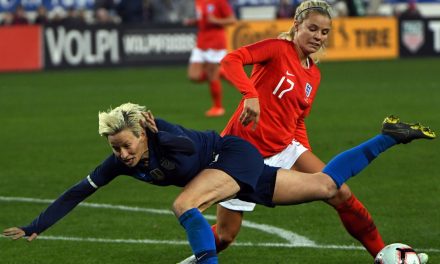