QUEENS, N.Y. – After dropping two decisions to preseason conference favorites, the St. John’s University men will look to get back in the win column at home, playing host to Hofstra Univeristy at 7:30 p.m. Tuesday.

St. John’s enters the match after falling in its home opener to reigning Atlantic 10 champion Fordham University, which bested the Johnnies, 1-0, Friday night at Belson Stadium. After being outshot 7-1 in the opening half, the Red Storm fired off nine second-half shot, but a defensive error in the 68th minute led to a Fordham goal.

Andrew Withers made a season-high five saves. The Wellington, New Zealand, native has allowed two goals in the team’s opening three games for a 0.67 goals against average.

Tuesday will mark the second game of a four-match homestand for the Johnnies, their longest such stretch of the season. After facing off against the Pride, the Red Storm will welcome Temple Friday night before closing with UC Santa Barbara Tuesday, Sept. 12. All matches of the Red Storm’s homestand will be broadcast live on ESPN3 and the Watch ESPN app.

Hofstra, which was picked to finish second in the Colonial Athletic Association preseason coaches poll, comes here with a record of 1-2-0 against stiff competition. After shutting out Penn State, 1-0, in its season opener, the Pride has dropped two consecutive decisions against nationally ranked foes on the road, falling to No. 6 Maryland and No. 12 Virginia. Senior forward Danny Elliott, who scored the Pride’s lone goal this season, was named to the preseason All-CAA Team last month. Last year, the second team all-conference pick tied for second on the team with six goals.

The Red Storm and Hofstra share a series history dating back to 1979, the first year of the men’s soccer program at St. John’s. In 14 meetings between the two schools, St. John’s holds a 10-3-1 advantage over its neighbors from Nassau County. The teams last met in 2015, a 2-0 win for the Pride at Belson Stadium that Sept. 6. 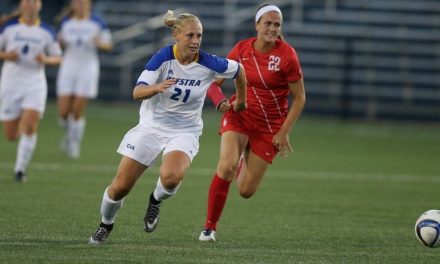 ROOKIE OF THE WEEK: CAA honors for Hofstra’s Carmichael

SO MUCH ON THE LINE: St. John’s men can clinch tourney berth with a draw; coach Masur one win away from 400