MIAMI — Senior forward Mamadou Guirassy scored twice in the second half for the NJIT men, who played FIU to a 2-2 draw after regulation due to lighting and heavy rainfall in the area at FIU Soccer Stadium Friday evening.

Guirassy, an ASUN Conference second-team honoree and Division I All-Southeast Region third-team selection last season, has three goals on the season and 13 for his career, which ranks the senior tied for second in the NJIT Division I records.

FIU broke through with 32 seconds remaining in the first half on a goal by midfielder Marvin Hezel, which was set up by Deshawon Nembhard’s corner kick.

On a Highlanders counter attack, senior captain Danny Cordeiro was taken down inside the box. Guirassy converted the penalty kick to knot the game at 1-1.

Guirassy scored the go-ahead goal in the 69th minute with a through ball behind the defense and keeper, tucking away a feed from freshman Thomas Radon.

FIU found momentum and got the equalizer in the 72nd minute on midfielder Paul Marie’s goal.

END OF THE LINE: NJIT men eliminated from NCAA tournament 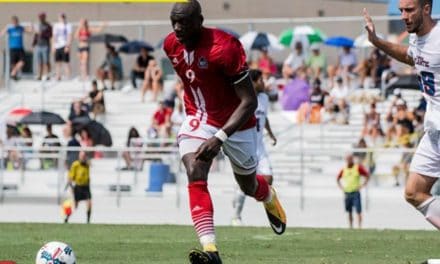 THE CLINCHER: NJIT men book a spot in ASUN tournament with 4-1 win