THE SAVIOR: Johnson comes up big as NYCFC blanks Galaxy, 2-0

CARSON, Calif. — New York City FC Saturday night did not have a letdown after its big Hudson River Derby win over the Red Bulls last week.

In fact, City got stronger as the game went on against the LA Galaxy, registering a 2-0 victory at the StubHub Center.

Goalkeeper Sean Johnson was magnificent as he recorded the shutout for NYCFC (13-7-4, 43 points), which climbed past the Chicago Fire (12-6-5, 41) and into second place in the Eastern Conference. The Galaxy (6-12-5, 23) has won only one game at home this Major League Soccer season.

“That man was man of the match tonight,” said rookie Jonathan Lewis, who tallied his first MLS goal. “He made some incredible saves. Kudos to him.”

Jonathan Lewis tallied his first goal with NYCFC while captain and star David Villa added to his league-high 18 goals.

In fact, if it wasn’t for Johnson, NYCFC would have been trailing at halftime. The veteran goalkeeper denied Romain Alessandrini by tipping away his right-wing cross in the 15th minute.

He went into action again in the 40th minute, parrying away Pele van Anholt’s attempt.

“Sean was fantastic in the first half,” NYCFC head coach Patrick Vieira said.

Johnson picked up where he left off in the second half, Johnson continued his stellar performance in goal, stopping Bradford Jamieson’s 16-yard attempt in the 84th minute.

By then, City enjoyed a 2-0 advantage.

Lewis fired home a 19-yard shot that hit the underside of the crossbar and bounded inot the goal in the 54th minute.

“It’s a great feeling to score my first MLS goal,” Lewis said. “I’ve been dreaming about those moments.”

Villa doubled the lead in the 74th minute as he powered a 20-yard blast for some insurance. 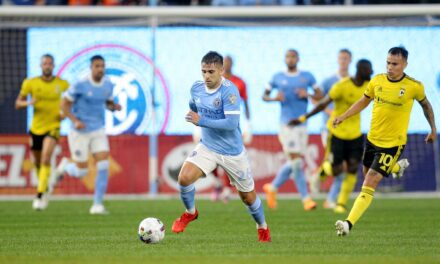