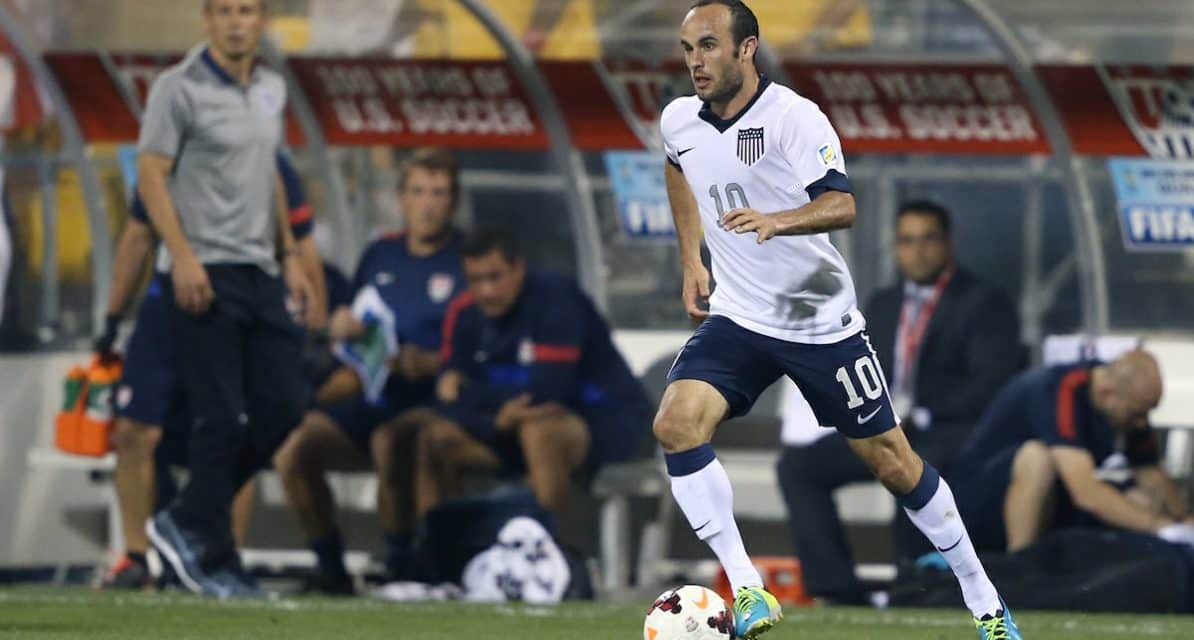 Landon Donovan scored one goal and set up another as he helped the USA qualifying for the 2014 World Cup with another dos a cero victory over Mexico. (Andy Mead/YCJ Photo)

COLUMBUS, Ohio — Regardless what transpires in Brazil next year and beyond, the U.S. national team knows it will always have Columbus.

And dos a cero.

Like clockwork, the Americans pulled off yet another 2-0 result, their fourth World Cup qualifying victory by the same exact score since they decided to make Columbus Crew Stadium a quadrennial chamber of horrors for El Tri a dozen years ago.

Veteran midfielder Landon Donovan, the comeback kid, set up the first goal by Eddie Johnson and scored the second goal. Goalkeeper Tim Howard produced some stellar goalkeeping late in the first half when it was anybody’s game on Sept. 10, 2013.

To rub it into their archrivals’ faces, the Americans (5-2-1, 16 points) took over the CONCACAF hexagonal lead from Costa Rica and qualified for their seventh consecutive World Cup and pushed the beleaguered Mexicans (1-2-5, eight) into fifth place by goal differential in the CONCACAF hexagonal with only two precious games remaining.

“Now it’s expected of us, but it’s never a guarantee,” said Howard, who led the team celebrations inside and outside of the locker room with champagne spritzing of teammates and fans. “World Cup Qualifying is tense. It’s always so tight. We said down in Honduras in February that it’s going to come down to matchday 8 or 9, which it always does. You can never really breathe a sigh of relief, but tonight we’re able to do that.”

As the U.S. put the finishing touches of its historic victory over Mexico, the players did not know whether they had clinched a berth at Brazil 2018. The Americans needed Honduras to tie or beat Panama, and that encounter was early in the second half with the Hondurans winning, 1-0. So, instead of the coaching staff and players talking to the media, they remained in the locker room to watch the remaining minutes of what turned into a 2-2 draw.

Donovan said watching the game was “a little nervy. The assumption was that regardless what happens we’re going to qualify, but you want to be finalized. We saw Panama score at the end, got a little nervous. But once they blew the final whistle, then everyone was excited to be going to Brazil.”

Added Howard: “That part was fun and then once they wheeled the champagne in it got even better.”

When the team emerged from its locker room champagne bath and shower, the players, now wearing white shirts with one word in capital block letters proclaiming QUALIFIED — allowed the ardent remaining supporters from the sellout crowd of 24,584 get into the action. Howard led the way, getting fans wet with the bubbly. No one seemed to complain.

Howard himself was given a Gatorade bath by a teammate. The players then formed a circle and danced in front of their adoring public before walking onto the field and throwing teammates up into the air and catching them.

There is good reason why the players celebrated so much.

What the U.S. has accomplished in the capital of Ohio has almost become mythical proportions. They have played the Mexicans four times in qualifying and won all four times by the same score — 2-0 or as the fans taunted the Mexican side — dos a cero — incessantly during the second half. For the record, those other qualifiers were in 2001, 2005 and 2009.

“This is a great crowd,” Howard said. “It’s become its own monster. People want to come to Columbus and see USA vs. Mexico. Because of the way results have gone the last four times, you almost feel like it’s our destiny to win here.”

“You see it when we came in the stadium,” Donovan said. “It was rocking already. That was a real atmosphere. That’s what we face when we go away. And it’s nice other teams have to face it when they come here. We enjoy playing in front of a crowd like that. They certainly boosted us on tonight and it was great to do it in front of them.”

For coach Jurgen Klinsmann, it was an opportunity to return to the World Cup as a coach. He won it as a player with West Germany in 1990 and finished third as German coach when his country hosted the extravaganza in 2006. Now he gets another shot at the golden ring.

“It means a lot to me like it means a lot to all of us. To the players, to the federation, everyone working here in this environment, to you guys as well as the fans. A qualifying campaign is a very difficult road and we knew that. I did that myself as a player, as a coach with Germany, and I had difficult moments. When I went through it the first round I almost didn’t go to the World Cup in 1990 and ended up winning. It is a special moment and we coaches enjoy it the same way as the players do.”

And the team doesn’t have to wait a month, when it hosts last-place Jamaica in Kansas City, Kansas on Oct. 11.

“We wanted to get this done as quickly as possible,” Klinsmann said. “We were upset with Costa Rica, how it ended [a 3-1 loss], but we couldn’t change it anymore. It is important, and it makes a lot of things easier for us on the federation’s side to plan things ahead. We can finalize things for Brazil, we can look at friendly games in November, and so it’s definitely important.”

Desperate to earn three points as their window of opportunity to reach Brazil gets smaller and smaller with each passing qualifying game, the Mexicans came out aggressively and forced the issue in the early going, though they did not get any decent attempts on goal.

After surviving the initial surge by the visitors, the U.S. regained its composure and began taking the game to El Tri, although the visitors did have their moments at the end of the half.

Howard came up big time in the final minutes of the opening half. He caught Giovani dos Santos’ close-range bullet in the 44th minute and denied defender Diego Reyes with a save that set up a corner kick in stoppage time.

The U.S. finally broke through in the 49th minute as Johnson scored. Donovan sent a corner kick in the middle of the penalty area and Johnson out-jumped Reyes and headed the ball past keeper Jose Corona as the stadium erupted in loud cheers.

“We worked on our running in the box yesterday, on who goes to the first post or second and third,” Johnson said. “A lot of the focus was going to be on our bigger guys. Clarence made a good run to the first post and Omar checked away. They were more focused on them and Landon does what Landon does. It was an unbelievable cross. I got a head on the first one in the first half and this time I wanted to take advantage of the opportunity. I saw the ball was right there and tried to keep it down.”

The Americans doubled the lead in the 78th minute. Clint Dempsey set up Donovan at the far post and the veteran midfielder slotted it home for a two-goal advantage as the stadium erupted again.

“They looked relatively timid and shy throughout,” Donovan said. “I’ve never seen a Mexico team look that way. When we scored a goal, it was pretty clear that we were either going to get a second or a third or it was going to end 1-0. It was nice to be able to beat them.”

The U.S. almost had a third goal — a penalty kick by Clint Dempsey late in stoppage time. He hit his attempt well right of the goal, making many media members wonder if Dempsey had done it on purpose to keep the score at dos a cero, now a legendary phrase and numbers in U.S. Soccer history.

The Mexicans will have to wait another four years before they will be able to break what has become a jinx and an embarrassment for the country, losing to the Americans in the north by the same score every four years. This time, however, it could be worse. El Tri could be sitting home come next June when the rest of the world is focused on Brazil.

While the Americans revel in the capital of Ohio, the Mexicans might see it as cruel and unusual capital punishment every four years. 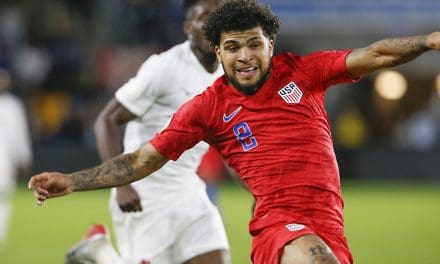 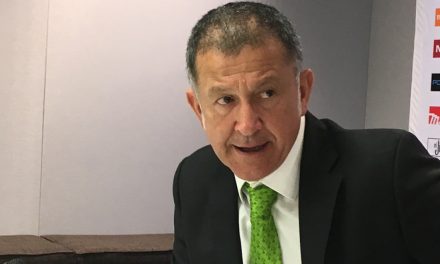 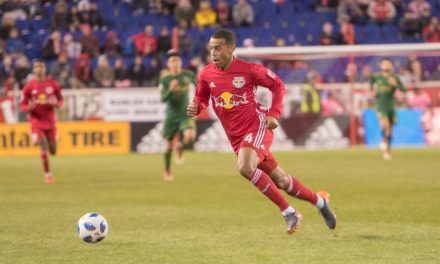