The first ever all-Irish final in Eastern New York State’s Dr. Manning Cup competition pits Cosmopolitan Soccer League juggernaut Lansdowne Bhoys against the Shamrocks — a team they’ve beaten four times in a row — at the Verrazano Sports Complex Sunday. And neither side is taking anything for granted.

“It’s a competition the club has never won, having gone close four years ago before losing to United FC [5-4] on penalty kicks in the final,” said Lansdowne president Williams McGrory, whose imperious Bhoys have won three consecutive league championships. “Coach Austin Friel will take nothing for granted and this time around will hope to have the services of captain Sean Kelly, Daryl Kavanagh and Yannick Reyering.”

Said Shamrocks boss Kevin Grogan, the former Ireland and Manchester United Youth ace: “The State Cup final is an achievement within itself but we have a squad that can go and compete to win that game. They say we are underdogs and we are comfortable with that title.”

Lansdowne has been the pre-eminent force in the CSL, one of America’s premier amateur leagues, with those three league championships between 2014 and 2016. In addition to picking up a sixth division title in the top flight two weeks ago, they’ve reached five finals this season – the Manning Cup being the first in line.

The Rocks, meanwhile, have been the new kids on the block since their return to the upper echelon last season. Grogan, who led the Bhoys to their first ever division title in 2012, has coached the Rocks to a second place finish this season.

Shamrocks’ greatest achievement in the top flight came in 1999 and 2000 when, under the captaincy of the late, great Robbie Walsh, the club won back-to-back League Cups — the first team ever to achieve that in CSL history.

Ahead of their cup final clash with Lansdowne this Sunday, the Rocks had a CSL championship semi-final date with seven-time titlists Pancyprian Freedoms at St. Michael’s Playground in Flushing last night [May 31].

If both are victorious, Lansdowne and Shamrock could meet in yet another first time all-Irish CSL championship game at St. John’s University’s Belson Stadium on June 9.

“I’m very happy to be part of an amazing club like the Shamrocks,” said Grogan. “It has a 57-year history and has had many great people attached to it over the years. Like any great club it’s had its up and downs. I’m just a blow-in but I’ve done my best to help try and get the team into a position to compete for trophies.

Highlighting one of the club’s fortes, Grogan noted: “We have a great team chemistry and you can’t buy that. We recruit people first and foremost.

“Our goalkeeper Frankie saved two penalties in the semi-final [7-6 shoot-out win over Greek Americans] and is a big part of why we are in the final. Frankie has had a tough life. We are his family now.

“I’ve been lucky as a manager with the Shamrocks because I’ve had [assistant coach] Stephen Doyle with me since I came to the club. We are very much on the same page regarding the disciplines of the game.

“The whole club has excelled this year. We have seven teams and they have all produced moments to remember. On Sunday our women’s team will also play in the State Cup final. It will be an amazing club day. Paddy Geraghty has done a great job with the women. He has the sixth sense for the game.”

Before the penalty victory over the Greeks in the last four, Grogan led his lads past East Hampton [5-0] in the quarterfinals after a forfeit win over Port Jefferson in the Round of 16.

“We are looking forward to a big day on Sunday,” remarked McGrory. “It’s already a great achievement to have three of our four adult teams competing for state cup honors. All teams have trained and played well over the past two weeks so should be well prepared.”

Other Lansdowne teams in State cup finals on Sundays are the reserves, for home Friel turns out, in their second defense of the D’Arpino Cup. They encounter a powerful New York Athletic Club ‘B’ side coached by Bill Saporito.

Then at 1:30 p.m., also at Field 2 at Verrazano, the Lansdowne thirds meet Mr. Dennehy’s, coached by Trevor Joyce and Welshman Ronan Gardiner.

Other State finals at Verrazano this Sunday [both on Field 1] are: New York Greek Americans Over-30 vs. Germania [EDSL] in the Marth Cup at 11:50 a.m., and CPR White vs. New York Ukrainians in the Flamhaft Cup at 1:30 p.m..

Also this Sunday, the Shamrocks Over-30 side continues its pursuit of a third consecutive CSL title with a playoff game against CPR Old Boys at 8 a.m. on Randalls Island field 70.

NYAC “B” could be on the cusp of a cup and league double after edging the Shamrocks reserves 3-2 on penalties on Randalls Island on Tuesday night to advance to the championship game. It was goalless in regulation.

“Tough, tight game on a small field — very little room, no quarter given on either side,” summed up Saporito. “Shamrock had one good chance in the first half that produced an outstanding save from fill-in keeper Steve Whitaker.

“John Stamatis had a free kick that crashed off the crossbar onto the line, but the Shamrock keeper was excellent,” he added.

In the shoot-out, Darren Coleman and Paul McDaid were on target for the Rocks, but Whitaker would produce the game winning save for NYAC.

Reserve champs in 2014, NYAC await next week’s Lansdowne-NYGA winner in the final on June 11. 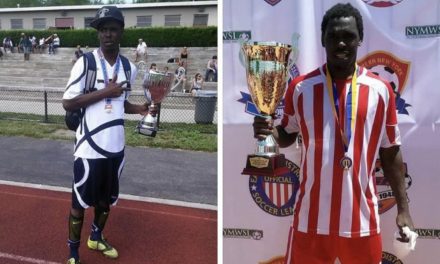 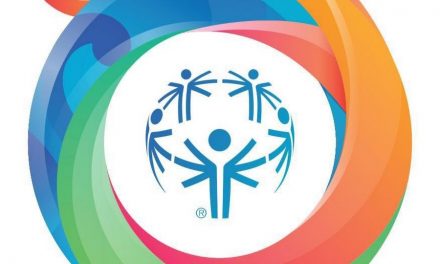 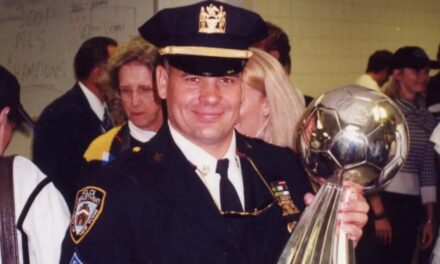