ROCHESTER, N.Y. – The Rochester Rhinos could not hold onto a one-goal lead and settled for a 1-1 tie with the Richmond Kickers in a United Soccer League match at Capelli’s Sport Stadium Sunday.

“I don’t think we had a lot of rested bodies out there,” Rochester head coach Bob Lilley was quoted by the Rochester Democrat and Chronicle. “Both teams seemed to content playing at a slower tempo. For us at home, that’s something we have to correct.”

Kenardo Forbes lifted the Rhinos into a 1-0 advantage in the 32nd minute.

Darius Madison and Forbes played a one-two between them at the top of the penalty area. Forbes broke in on the left side, raced past his defender and around the goalkeeper keeper to roll it into the empty net.

“It was a decent performance for us defensively,” Lilly was quoted by the newspaper. “This was a chance for us to jump in the standings and we got a tough one coming in on Wednesday.”

The visitors equalized at the stroke of halftime. The Kickers won a free kick 32 yards out as Raul Gonzalez bent the ball away from keeper Tomas Gomez into the bottom right corner to knot it up at 1-1.

The Rhinos will play England and Chelsea standout Joe Cole and the Tampa Bay Rowdies (6-2-2) Wednesday at 7:05 p.m.

“Hopefully, we saved our energy so we have more for Wednesday,” Lilly said.

FIT TO BE TIED: Rhinos tripped up by late PK in draw 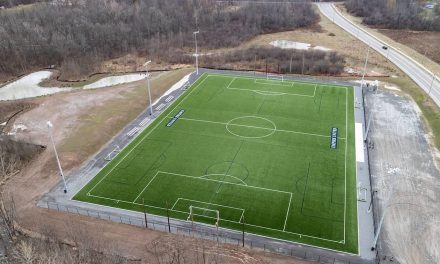 AN EXCLAMATION POINT, THEN QUESTION MARKS: Rhinos will play temporarily at United Sports Complex, but what league will they compete in and how will they rebrand?

END OF THE LINE: Rhinos eliminated by Louisville in USL playoffs