SOME FAMOUS FIRSTS: Of the revived Rochester Lancers through the years, indoor and outdoor

ROCHESTER, N.Y. — With the Rochester Lancers ready to take their first steps and kicks as an outdoor team against the Dayton Dynamo in a National Premier Soccer League game at Aquinas Institute Sunday at 4 p.m., it would be interesting to take a look at some famous firsts in the history of the franchise, indoor out out.

A group of local, regional and Canadian-based soccer players formed the Rochester Lancers in an exhibition match against Concordia Sport Club of Hamburg, Germany at Aquinas Stadium May 30, 1967. The Lancers lost, 4-2, before 5,132 spectators.

The first of two by John Kerr, in the 52nd minute. Kerr, one of those Canadian players, dribbled around three defenders and launched an 18-yard shot over goalkeeper Harold Voight’s hands.

Concordia’s Heiner Castroff tallied the equalizer in that May 30 encounter, sending a bullet into the left-hand corner past goalkeeper Orest Banach. It was the start of three-goal assault in a five-minute span that turned the game around for the German side.

That was a 4-2 defeat to the Boston Tigers before 2,004 at Aquinas Aug. 27, 1967. Carlos Metidieri, who someday would fill the net at Aquinas Stadium, scored the first goal of the game with a 23-yard blast in the ninth minute. According to Rochester Democrat & Chronicle writer Alex Loj, Metidieri’s shot surprised “a drowsy Lancer defense and goalkeeper Szabo.” Jorge Benitez, the 1966 American Soccer League Golden Boot winner, paced the visitors with two goals, setting up the first one as well.

Luis Fernando’s header past Tigers goalkeeper Claudio Dragonetti, off a Tommy McGlennon assist, in the 20th minute sliced the deficit to 2-1 for Rochester.

That occurred Sunday, Sept. 10, 1967 at Aquinas Stadium as Rochester defeated the Newark Ukrainian Sitch, 4-2, in front of 1,257. The Lancers did it the hard way, scoring three goals despite playing with a man disadvantage for the final 64 minutes after Kenny Allison was ejected for a dangerous play in the 26th minute (there were no red cards in 1967). Nelson Bergamo became the first Rochester player to secure a brace with two late second-half goals. Tito Laurini and Gordon Roberts also scored for the winners.

Tito Laurini had the honor in the 49th minute against Newark Sept. 1 as he was allowed to retake a missed attempt because the Sitch goalkeeper moved on his first try — after Gildendor DeLima was fouled in the penalty area. The goal tied the score at 2-2.

On April 11, 1970, the Lancers defeated the Dallas Tornado in Dallas, 2-1. Roberto Ribeiro (35th minute) and Josip Ognjanac scored a late goal against goalkeeper Kenny Cooper. “The Rochester Lancers, outplayed for at least 75 of 90 minutes by the host Dallas Tornado, scored a 2-1 victory in their North American Soccer League debut here last night,” Loj wrote as his lead.

That was recorded by Roberto Ribeiro in the 35th minute of the 2-1 road victory over Dallas April 11, 1970. Referee Eddie Pearson, who was to become NASL head of referees, whistled a foul on the hosts barely outside of the penalty area. Luis Marotti found an open Ribeiro and the one-time Bangu star slotted the ball into the right corner past Cooper. It turned out to be Ribeiro’s lone goal of his Lancers career (he played four games).

By Bobby Moffat, who slotted home a rebound of a Luis Juracy shot that goalkeeper Dick Howard saved in the 52nd minute in the Lancers’ 2-1 win over the Dallas Tornado April 11, 1970.

The Lancers defeated the Washington Darts in the opening match of a two-game, aggregate goal series in the NASL championship series at Holleder Stadium, 3-0, Sept. 5, 1970. Raul Herrera led the way with two goals and Luis Marotti added one before a crowd of 9,321, up until then, the largest crowd in club history.

Herrera scored it in the 26th minute of the 3-0 victory over the Darts Sept. 5, 1970 as he deflected Yao Kankam’s shot past goalkeeper Lincoln Phillips from four yards.

A 16-15 loss to the Syracuse Silver Knights at ONCenter War Memorial Arena in Syracuse, N.Y. Nov. 4, 2011. The Silver Knights raced to an 8-2 first-period advantage before the Lancers rallied to grab a 15-12 lead at the end of the third quarter. Jeffrey Hughes connected for the game-winner with 39 seconds remaining in front of 3,720 spectators.

That came on Nov. 19, 2011, a 22-13 home victory over the Silver Knights at the War Memorial as 5,928 spectators watched. Andrew Hoxie and Salles finished with four points and an assist each. 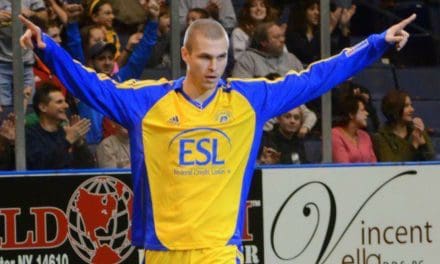 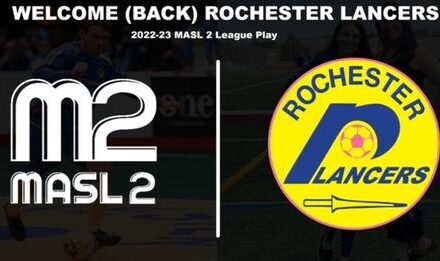 RETURNING TO THE GREAT INDOORS: Lancers2 to play in M2 in 2023 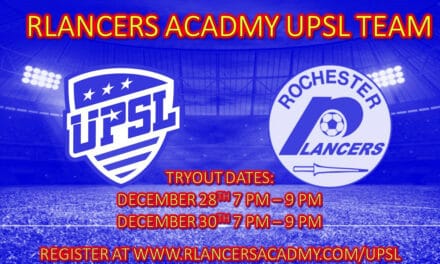 ADDING ON: Lancers will have an UPSL team