Kawasumi, 31, broke two NWSL records with a performance that saw her record one goal and four assists to lead the Reign to a 6-2 home victory over the Washington Spirit as Seattle also established a game club record with six goals.

The Yamato, Japan native assisted on goals by midfielder Christine Nairn in the 20th minute, forward Beverly Yanez in the 35th minute, forward Megan Rapinoe in the 71st minute and substitute Lindsay Elston in the 79th minute in addition to scoring a goal of her own in the 68th minute as the Reign emphatically extended its NWSL record home scoring streak to 20 games.

The four assists by the Japan international are a NWSL game record – breaking the previous mark of three assists set by Lianne Sanderson, who accomplished the feat for the Boston Breakers in a 3-0 victory over the Washington Spirit on May 25, 2013.

Seattle Reign FC forward Nahomi Kawasumi has been named the Player of the Week for Week 5 by the NWSL Media Association, after scoring a goal and notching an NWSL-record four assists in Seattle's 6-2 win over the Washington Spirit.

Kawasumi also set another league record Saturday as she became the first player in league history directly involved in five goals in one match.

The Reign will return to action against the Orlando Pride at Memorial Stadium in Seattle Sunday at 9:30 p.m. ET.

The NWSL Player of the Week is selected each week of the regular season by the NWSL Media Association, a collection of writers that cover the league on a consistent basis.

THEY’RE ELIGIBLE: For the NWSL draft 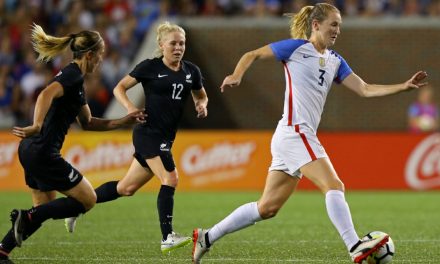 NOTHING COULD BE FINER: North Carolina Courage secures NWSL Shield