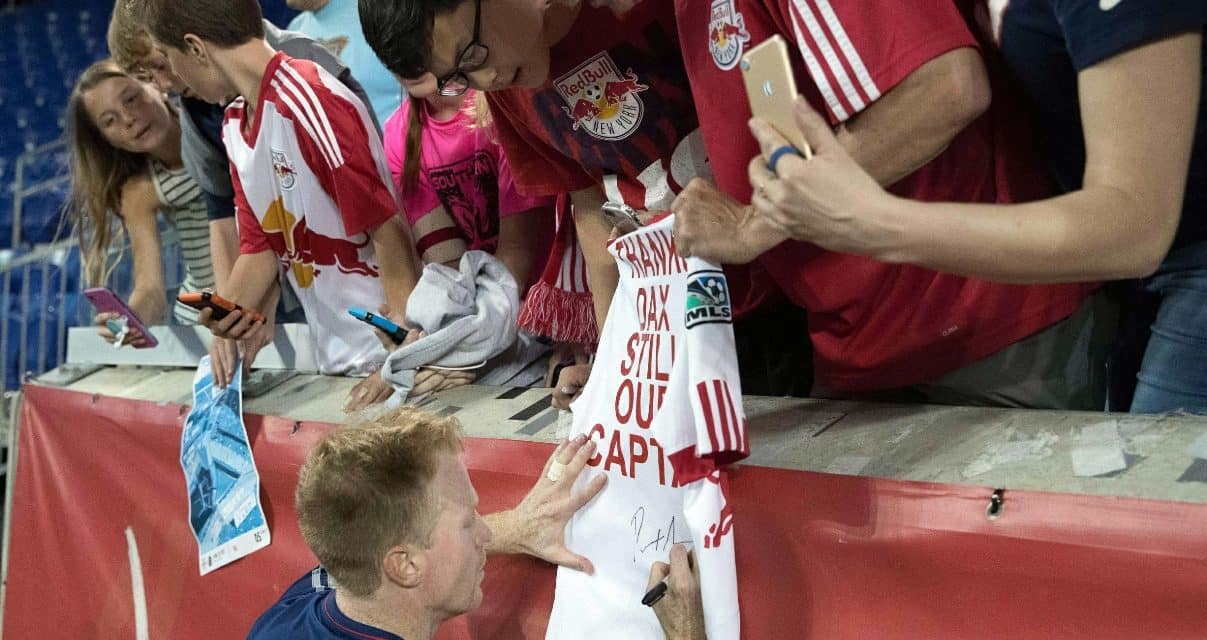 Dax McCarty  signs one of the many countless shirts after the game. (Vincent Carchietta/USA TODAY Sports)

HARRISON, N.J. — Now, this is a scene you certainly don’t see every day at a sporting event:

A member of the opposing team, the losing side, taking a lap around the stadium, acknowledging and appreciating the applause, giving some back and taking time to meet, to talk to, to sign autographs and take some pictures with his adorning fans.

For more than an hour after his Chicago Fire was beaten by the Red Bulls, 2-1, Dax McCarty took his lap of appreciation around Red Bull Arena Saturday night.

He started at the north end of the field and slowly, but surely worked his way toward the Southward, where some of the team’s most ardent faithful supporters call home game in and game out.

The former Red Bulls captain realized it was going to be an emotional night at the stadium in which he forged many memories on two teams that won the Supporters Shield and a third that captured the Eastern Conference title.

During his 5 1/2-year tenure with the club, McCarty forged a reputation as one of the toughest defensive/holding midfielders in all of Major League Soccer. The fans noticed and gave him his due.

After Saturday’s disappointing defeat, Dax felt it was time to give some of it back in his first visit to the stadium since his controversial trade to the Fire Jan. 16.

“I needed to do it,” McCarty said. “The fans who waited for me, it was more than I could have imagined. I mean, the people here are just good people, real loyal. The words that they said to me really meant a lot to me. So, I’ll always remember them and obviously I wanted to show them how much they meant to me and stick around for anyone who was willing to stay. I would have stayed all night and signed autographs and took pictures if I had to. I appreciate them.”

Of course, McCarty had to get on the team bus and return to the hotel, so that was going to be quite difficult.

McCarty, who celebrates his 30th birthday Sunday, had a range of emotions with which to deal. Remember, he did not return with his new team and teammates to enjoy a nostalgic night. He came back to win and steal three points from a team that hadn’t lost a regular-season MLS match at home in a year. The Red Bulls have a 19-game unbeaten streak at home (16-0-3), which, ironically, McCarty helped to forge.

“It was definitely strange,” he said. “Very familiar. Saw a lot of great faces, familiar faces that I’ll definitely miss. Obviously, the objective of coming back here was to try to get three points and we failed at that. So that was disappointing. I felt we played well enough to get three points. Came in here and created chances and that’s something you don’t do often. The Red Bulls hadn’t conceded many goals up to this point this year. I thought we had plenty of chances when it was even 1-1 to go up 2-1. It was a frustrating night overall because you’re left wanting more, but overall obviously, an emotional night being back here. I’m upset that we couldn’t get three points.”

During pregame warmups, the Red Bulls showed a highlight video of some of McCarty’s most memorable moments with the club, as an individual and as a teammate.

“I didn’t get a chance to see too much of it,” he said. “I saw a little clip here or there. It was a nice gesture. Obviously, I appreciate it.”

Still, returning to the stadium in which McCarty established himself as one of the league’s leading defensive mids was cathartic as well.

“I was really looking forward to it, but now that is is over, it is more of a relief, just to get it over with,” he said. “Obviously, there was a lot of hoopla surrounding the game, a lot of written, a lot of chatter. But I think you just have to go out onto the field and get through it. It’s emotional. Obviously, it’s frustrating to not win. That’s the thing I’m most upset about. You have to stick around after the game and sign all these autographs and you’re really pissed off inside that you didn’t win the game. That’s something that’ll bother me. We lost to a pretty good team. I thought the performance actually merited more than a loss.”

For a while, it looked like the 5-9, 150-lb. veteran midfielder was going to be the conquering hero returning home for some glory.

McCarty set up the Fire’s lone goal by Nemanja Nikolic in the 59th minute. He won a second ball, danced around a few Red Bulls and slipped a pass to Nikolic, who scored from the left side of the penalty area. It snapped the Red Bulls’ home shutout streak at 419 minutes.

He screamed when the ball went into the net.

“Finally we broke through. We got what we deserved,” McCarty said. “We deserved to get an equalizer. So that was a relief. Again, you’ve got to keep pushing against the Red Bulls because they keep coming. They actually picked up their game a little bit when they scored. We dropped off a little bit. We had plenty of chances to win the game tonight, plenty of chances to draw the game and that was the frustrating part.”

“He impacted the game,” he said. “A lot of challenges he won in drills in the middle of the park, but at the end, he assisted on the goal. It was a consistent play, very characteristic for him. Winning the ball, winning another one drill after another and then assisting to Nikolic, I think it was great.”

But McCarty wasn’t meant to be the hero. Former teammate Kemar Lawrence scored the game-winning goal in the 71st minute, though McCarty tried for the equalizer with an 89th-minute header that wound up off target.

“I was frustrated,” he said. “I should have scored on that. It was a little far in front of me but that was my bread and butter right there. I’m mad at myself because that should be a goal. Good service.”

OFFSIDE REMARKS: Red Bulls must deal with the curse of the nine, but they should be in the running again this year 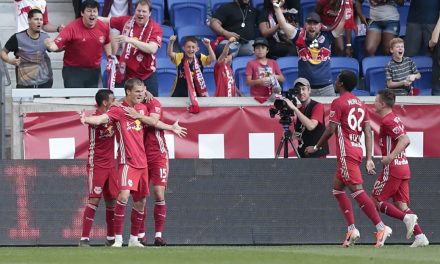