TINTON, N.J. – Sky Blue FC has announced that the team has renewed its corporate partnership with Provident Bank, which returns as the official banking partner of the National Women’s Soccer League team.
“We are very happy to have Provident Bank returning as a corporate partner in 2017,” Sky Blue FC president and general manager Tony Novo said in a statement. “Provident Bank is community focused and also an avid supporter of women’s athletics, which aligns directly with our vision at Sky Blue FC. As we enter the second year of this relationship, we look forward to developing even more mutually beneficial initiatives together.”

All Provident Bank customers will receive discounted offers from Sky Blue FC throughout the season by using their Provident Bank debit cards. Sky Blue FC also will work directly with the Provident4Women program, which provides insights from women to women about family and home, career and business, life goals and investments.

“We are excited to be the Official Banking Partner of Sky Blue FC,” Provident Bank president and CEO Chris Martin said in a press release. “Sky Blue FC’s commitment to the advancement of women’s soccer is consistent with the underlying principles that guide our Provident4Women initiative. They are an ideal partner; we share similar corporate values and a passion for winning.”

Sky Blue FC will play its home opener when it hosts FC Kansas City at Yurcak Field on the campus of Rutgers University in Piscataway, N.J. Sunday, April 30 at 6 p.m.

THE HAVES VS. THE HAVE NOTS: Courage, which can clinch playoff spot, visits winless Sky Blue FC 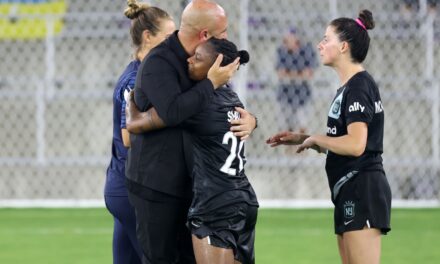