Defying the elements, CSL champs Lansdowne Bhoys knocked off Polonia 3-1 on a bitterly cold Saturday night at Tibbetts Brook Park to reclaim the First Division leadership from Shamrock at the start of the Cosmopolitan Soccer League spring campaign.

But it was old-hand Daryl Kavanagh who notched the proverbial ice breaker from 12 yards.

It was 1-0 at the interval and on resumption new boy Fritzon unleashed a shot that was blocked by the Polonia goalie. Yannick Reyering banged in the rebound.

Ibrahim Diaby, one of the other debutants, then sealed it with a fabulous finish from 20 yards.

“All credit to Polonia who battled to the end and scored with a header on 88 minutes,” said Lansdowne president William McGrory. “Coach Friel was happy with the team performance.”

The Bhoys are pursuing a fourth straight CSL title.

In the curtain raiser at Tibbetts, Mike Corbi struck four times in the Lansdowne reserves’ 10-0 shellacking of Polonia ‘B.’

“After a good preseason it wasn’t how they’d win but by how many [goals],” remarked McGrory.

“Brilliant team performance,” McGrory said. “It was also good to see Decky Reilly back in the hoops as coaches Keith St. ledger and Sean Kelly go for two [titles] in a row.”

Lansdowne ‘B’ [8-1-1, 25] also moved atop the Reserve Division standings, a point ahead of idle New York Greek Americans.

Nicolas Mikolenko, who also had an assist, John Kaddo and Andreas Moudatsos connected.

Williamsburg improved to 9-1-1 [28] ahead of second place Korabi, which had a forfeit win over New York United in the opening round of the Harry Saunders Cup.

Goals in each half by Guisseppe Romero [32nd minute] and Mamadou Diombera [67th minute] earned NYC Metro Stars at 2-0 decision over Homenetmen in their mid-table Metro Two clash on Randalls Island.

“Our first victory in 2017 on goals by my two best strikers,” remarked coach Edison Calle.

Rivals New York Greek Americans and Pancyprian Freedoms produced another Over-30 thriller at the Met Oval worthy of the tag “El Clasico.”

Taso Polydefkis, Pete Halkidis and Chris Zizimatos had Pancyprian cruising 3-0 at one point before Leo Gkoros and Diego Gorosito [two] scripted a Greek comeback in a 3-3 tie.

Holders Zum Schneider and their reserve team both reached the quarterfinals of the John Kilby League Cup after a pair of victories in the opening round – on Randalls Island.

The firsts blanked Brishna 3-0 while the second unit edged Manhattan Celtic 5-4 on penalties after a 1-1 tie.

Felix Schäfer [20th] fired Zum ‘A’ ahead from a Caetano Sanchez cross. And after defender Daniel Grundei [65th] extended the lead, the speedy Sanchez sealed it [75th]. He beat two defenders and the goalie following a brilliant counter attack.

“The game was tough but fair. Both teams played excellent, fast-paced soccer at a good level,” said Zum’s Alexander Berscheid.

The Zum reserves, meanwhile, had a goal from Ricardo Sutherland in the 1-1 tie with Celtic in regulation. He was on target again in the shootout, along with Robert Manukyan, Eli London, Mathi Jorge and Edouard Caumon.

Zum ‘A’ await the Stal Mielec-NYPD FC winner in the last eight while Zum ‘B’ face CD Iberia, which beat Beyond FC 5-2 across the Hudson River.

League Cup winners in 2014 and 2015, CD Iberia twice came from behind to toss out Beyond at Laurel Hill Park and get its 2017 campaign to a winning start.

“Beyond was quick to open the marker with a goal in the first five minutes,” Iberia player Chiki Vazquez said. “We fought back and tied it quickly with a goal by David Lago. Beyond went ahead again with a great counter and we were able to tie it before half with a penalty [won by] David Lago that was converted by Marchello Russo.

Simon Czaplinski scored both goals for the hosts.

On resumption, Lago struck again with a superb volley to make it 3-2. This was followed by a Vazquez brace later in the half that killed off the game.

“A good start to the cup and the spring season,” Vazquez said.

“We are looking forward to the spring as we had a ton of injuries in the fall,” added Iberia’s other David Lago, the manager. “The core group is healthy and we have also added a goalie as we played many of our games in the fall with outfield players in [the net] which cost us in three of the five games we lost.”

Danny Fernandez [44th minute] drew first blood for Hoboken FC, but the Jersey side conceded twice in the second half to succumb 2-1 to the New York Greek Americans reserves at Laurel Hill Park. [55th, 81st]

Defending champions Barnstonworth Rovers edged Beyond FC Metro 2-1 on penalties to advance to the quarterfinals.

Beyond’s Farid Ordoñez had Barnstonworth on the verge of elimination when the holders pulled off the great escape.

“Joaco Lynch scored the equalizer at the death assisted by our keeper Matt Garcia on a free kick from half-field,” Timothy Hattori said.

It ended 1-1 and in the ensuing shootout, Nelson Restrepo, Lynch, Toby Obi and Matt Donovan connected for Rovers. “Matt Garcia [goalkeeper] saved the second kick and they hit the post on the third kick allowing us to win 4-2 on PKs,” Hattori said.

Standing between Barnstonworth and a semi-final berth in the Saunders Cup are their Metro Two rivals and unbeaten West leaders BW Gottschee, who forked out Hoboken FC 2-0 at Red Hook.

Brandon Silva and Luis “Panama” Andrion, the latter on his debut, starred for Gottschee. “Man of the match was another player making his debut, goalkeeper Julian Rodriguez,” said John Ryding.

In a minor upset on Randalls Island, Metro One side Shamrock 1960 outlasted Second Division Manhattan Kickers ‘B’ 6-5 on penalties to book a quarterfinal berth.

Goalie Ryan McKinley starred for the Rocks with three saves in the shootout and one penalty conversion in sudden death to set up the victory. Neil Mannion, Dave Harvey, Dylan Wallace, Joe Flynn and Anthony Carabotta were the other penalty scorers.

Wallace had connected earlier in the 1-1 regulation time tie. His go-ahead-goal was pegged back by Kickers’ Dennis Kachintsev.

Shamrock next face division rivals Korabi, who had a forfeit win over New York United.

The latter edged Flushing FC 1-0 at McCarren Park on a first half penalty won and converted by Arturo Bello.

Astoria defeated City International’s second unit 3-0, thanks to Elvis Copa, Sam Mahir and an own goal.

Elsewhere in the Saunders Cup, Deportivo Sociedade New York and Beyond FC Reserves meet in the last eight following victories over Gotham Argo and CPR Reds ‘B,’ respectively.

William Denslow scored for Gotham in their 3-1 loss to Deportivo.

Manhattan Kickers Premier also put five past Celtic Masters without conceding any to storm into the Over-30 Cup quarterfinals against holders Hoboken FC..

Celtic Legends emphatically claimed the Irish bragging rights in the Over-30 Cup with a 4-1 drubbing of Shamrock Legends.

“That was a very strong Manhattan Celtic Legends team but we were helped by having Sean Riley, Ivani ‘Ney’ de Oliveria, Leo Coimbra and Tayfun Gokmen from our Over-30s,” said Shamrock boss Emmett Harvey.

Living up to its age-old rep as an academy of sorts, the CSL is celebrating three players – all Cedar Stars alum – that are moving up in the football world.

Mike da Fonte, a center back who spent three years with Cedar [nee Clarkstown Eagles], has signed with MLS’s Colorado Rapids for the 2017 season.

Bledi Bardic is in camp with the Cosmos in Bermuda trying to make it while his fellow forward Christiano Francois has inked a deal with the Rochester Rhinos.

WINTER IS COMING: LISFL plans for some sort of indoor tournament or league 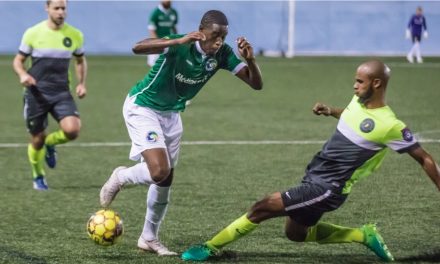