DON’T TAKE ANYTHING FOR GRANTED: Why the Red Bulls should not take Atlanta lightly in season opener tonight

On Sunday night, the Red Bulls take on Atlanta United the expansion team’s very first MLS match. New York should not think it will be a cakewalk for so many reasons. First of all, Atlanta has many veterans players. Second, the Red Bulls should harken back to their 2009 season opener when they visited the Seattle Sounders and wound up on the very short end of a 3-0 result.

It was an embarrassing match.

Saying that, here is my account of that debacle from eight years ago.

SEATTLE — If you had walked into Qwest Field Thursday night not knowing the backgrounds of the teams, you would have sworn the Red Bulls were the expansion team playing its first game and not the Seattle Sounders FC.

That’s how bad and embarrassing the Red Bulls were in their 3-0 season-opening loss.

The Red Bulls hardly looked like the team that reached the MLS Cup final last season. They could do very little right as their attack could not get untracked as many players lacked composure on the ball and their midfield was invisible for long stages. Their defense allowed the Sounders room when it counted before a crowd of 32,523.

The Red Bulls 2009 season began as last season ended — giving up three goals in a loss to a Sigi Schmid-coached team. The Red Bulls lost to Schmid’s Columbus Crew in the MLS Cup final, 3-1.

“Its one of those games you don’t even want to look at the video,” Bulls coach Juan Carlos Osorio said. “You want to throw it in the garbage.”

No one argued with Osorio.

“It was tough watching from the back,” said central defender Mike Petke, who was stripped of the ball at midfield for Seattle’s third goal. “It just looked off from everybody. from us in the back straight up to the top. We have a lot of work to do next week.”

“Unfortunately, we did not come out and play,” goalkeeper Danny Cepero said. “It stings. It almost feels like a hangover from the final.”

Colombian forward Fredy Montero and his teammates certainly came out to play. He scored two goals and set up a third for the Sounders in one of the most memorable MLS matches in the league’s 14-yard history.

“It was everything you dreamed,” Schmid said. “The beauty in any game is in the final result and it was a beautiful result. Three-nothing at home in the opener for this franchise and MLS. The crowd was outstanding. The atmosphere was tremendous.”

Saying that, the Red Bulls were ugly.

Montero struck first in the 11th minute, firing home a 17-yard shot from the right side of the penalty area.

“The ball was shifted from one side of the goal to the other so we were moving and shifting,” Cepero said. [Kevin] Goldthwaite went to take a step in and as he went to go block the ball, it went through hsi legs. I lost sight of it for second and at that point it was too late. A bit of an unlucky break. On some of my better days, I think I get that ball.”

Montero turned playmaker in the 25th minute as he fed Brad Evans, who placed the ball through goalkeeper Cepero’s legs.

“He was able to slip through unmanned,” Cepero said. “I was expecting him to turn inside. He took me by surprise. I didn’t get my feet set and as a result the ball squirted through my legs. Again, on my better days I am able to block that ball. If I make those two saves I think the game is a little closer.”

Added Osorio: “After that it was a mountain to climb. We couldn’t really get any good efforts on shots on goal.”

Petke, who was stripped of the ball for Montero’s third goal in the 75th minute (“I take full responsibility for that one,” he said), sat looking quite peeved while still in his uniform at his locker.

“Two shots in the first half they had and they scored both of them,” he said. “I don’t know what you called that. Maybe luck. Maybe they should take off to Vegas after that. We didn’t get the job done.”

He felt that the team let Cepero down.

Bulls captain Juan Pablo Angel, who had scored more goals (33) than any other MLS player the past two seasons, did not place a dangerous shot on goal. He placed a 21-yard free kick well high over the crossbar in the 13th minute.

“The best way to shutdown Angel was to shutdown [Jorge] Rojas and [Dane] Richards,” Schmid said. “We limited his chances because the services couldn’t get to him.”

Added Angel: “We’re disappointed and made mistakes and we got punished by it.”

The Red Bulls made Sounders goalkeeper Kasey Keller work twice. Keller stopped Macoumba Kandji on a point-blank attempt in the 69th minute and tipped a long-range shot by midfielder Jorge Rojas over the net.

“Kasey came up with a really big save,” Schmid said. “What you don’t see or hear is how positive he is with his top four. He doesn’t rant and rave. He encourages his defenders.”

On Friday, it could be Osorio’s turn to rant and rave at his defenders and team.

‘A MARATHON, NOT A SPRINT’: Armas: Red Bulls in no hurry to make additions or add DP 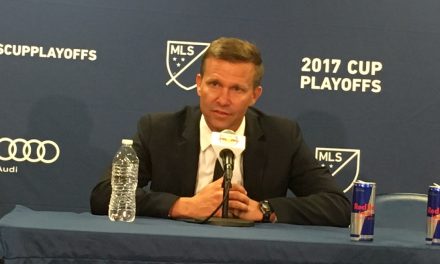 GETTING HIS DUE: Armas lauds Marsch for Supporters Shield effort