A BRIEF HISTORY: Of the Hudson River Derby 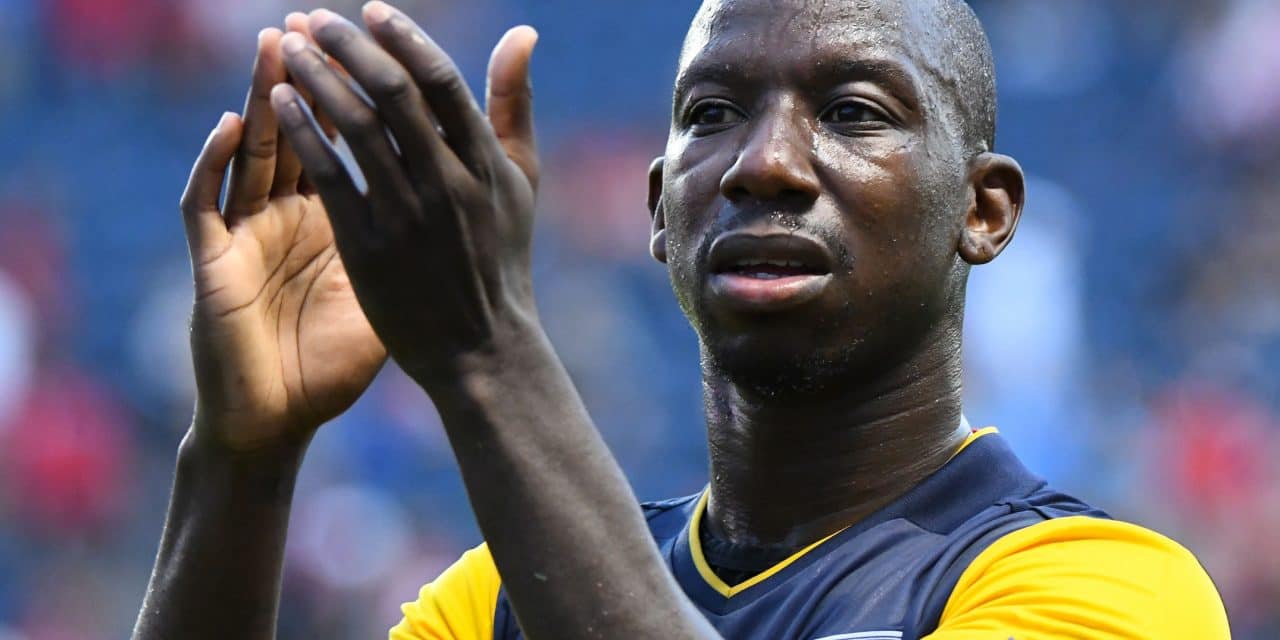 Since the Hudson River Derby kicked off in 2015, the Red Bulls and New York City FC have met six times, with the former side winning five times, City once.

With the teams tangling in a preseason game in the Diamond Desert Cup in Tucson, Ariz. Wednesday (Yes Network, 4 p.m. ET), perhaps it is a good time to look back at the first six encounters between the rivals:

Despite playing the final 54 minutes a man down due to a Matt Miazga red card, the Red Bulls survived a late rally by City to register a 2-1 victory in front a loud and boisterous capacity crowd of 25,217 at Red Bull Arena.

Bradley Wright-Phillips tallied twice for the Red Bulls (4-1-4), once in each half. He found the net in the fourth and 52nd minutes. Lloyd Sam set up both goals.

“We started well,” Wright-Phillips said. “Lloyd Sam was getting a lot of joy, I could feel a goal coming. Obviously didn’t know who was going to score, I was just happy to get on the end of it. I didn’t have to do much. Lloyd did all the work.

“It was a great feeling to score in a derby. It always is.”

Second-half substitute Patrick Mullins pulled one back for NYC FC (1-6-3) in the 76th minute as the visitors extended their winless streak to eight games.

The Red Bulls found themselves as the toast of the town Sunday night.

The Red Bulls struck twice within the opening seven minutes of the second half to turn a halftime deficit and into the lead in what turned into a 3-1 victory in the second game of the Hudson River Derby before 48,047 spectators at Yankee Stadium Sunday night.

Since the Red Bulls won the first encounter between the two teams, they already won the three-game series between the sides with the third game Aug. 9.

Wright-Phillips (47th minute) and Chris Duvall (52nd minute) for goals after Thomas McNamara gave the hosts the lead in the sixth minute. Miazga (73rd minute) gave the Red Bulls some breathing room with a second-half score.

The win lifted the Red Bulls (6-5-5, 23 points) into a third-place tie with Toronto FC and Orlando City FC in the Eastern Conference and extended their lead over NYC FC (4-8-5, 17) to six points. Had the first-year Major League Soccer team won, it would have drawn even with the Red Bulls on points with 20 apiece.

“We’re definitely excited about the three points, but to come against your rivals, especially with all the build-up that they’re trying to put into it, we understand that,” Red Bulls goalkeeper Luis Robles said. “It’s marketing. It’s going to be good for the league. We’re on board with that. But we want to make a statement that we were here first and this is our turf and we’ll continue to defend it.”

Call it a hat-trick of wins.

Wright-Phillips (21st minute) and Felipe (85th minute) scored goals as the Red Bulls (10-6-6, 36 points) moved back into second place in the Eastern Conference while NYC FC (6-11-6) failed to move out of eighth place.

The Red Bulls won the first encounter here on May 10 here, 2-1, and recorded a 3-1 decision at Yankee Stadium on June 28.

Only minutes before kickoff, the Red Bulls’ faithful in the South Ward got off a zinger to their Hudson River rivals, unveiling a tifo of NYC FC’s former internationals — Frank Lampard and Andrea Pirlo — with the caption, “City Retirement Home.”

“This was a huge match,” Red Bulls head coach Jesse Marsch said. “The energy leading up to the game was big. The energy around the stadium on the night was big. We knew it was going to be. We knew they were going to come with a lot, and they did. They threw a lot at us. They had a very good second half. We had some heavy legs and we hung in there. Luis [Robles] made some big saves. There is no doubt that this was special.”

On the other hand, it was not so special for NYC FC head coach Jason Kreis. “I’m very frustrated with a third loss to any opponent,” he said. “This has become a heated rivalry very quickly so were really up for this game. I really thought we’d get a better result.”

When the Bulls defeated New York City at Yankee Stadium last year, it took them all of 90 minutes to score three goals. On Saturday, they only needed 45 minutes in the most one-sided confrontation of the Hudson River Derby.

Dominating play from the opening kickoff to the final whistle, the Red Bulls reminded pro soccer fans that New York City soccer was still red, rolling to a stunning 7-0 triumph over City.

“Incredible performance,” Marsch said. “We had a bunch of guys on the field who wanted to express how much they wanted it.”

Wright-Phillips, who entered with only three goals in 12 matches, struck twice within a five-minute span in the closing stages of the first half. One of those goals was a goal of the week nomination, a bicycle kick that closed out the three-goal first half.

Team captain Dax McCarty, who hadn’t found the back of the net yet this season, also connected twice off of Sacha Kljestan corner kicks — one in each half. Rookie and Manhattan resident Alex Muhl also got into the act, scoring his first MLS goal less than two minutes after replacing Mike Grella. Second-half subs Gonzalo Veron and Gideon Baah also found the net for the Red Bulls.

“It was one of those games where nothing went wrong,” he said. “We have had a lot of games this year where I feel like we didn’t get the luck, but today it all went our way.

“We came in today and showed them nothing but respect, which is why we worked so hard, and today we were just so clinical and everything came off for us.”

A day before the red, white and blue celebrates its 240th birthday, New York City FC made an important statement by finally painting the town blue by winning its first Hudson River Derby in comprehensive fashion Sunday.

City avenged its embarrassing and worst loss of its young history with an impressive 2-0 victory at Yankee Stadium.

The hosts’ supporters certainly did not leave Yankee Stadium feeling blue after securing their first derby victory in their fifth try against the Red Bulls and seventh overall. City was eliminated in the last two Lamar Hunt/U.S. Open Cups by the Cosmos.

Captain David Villa, who scored his first derby goal (66th minute) to seal the victory. downplayed the importance of the win for the club, claiming it was more important for the fans.

He called it a “very good day for us. Obviously it gave the supporters one victory in the derby.”

Jack Harrison tallied in the eighth minute for City, which enjoyed a man advantage for the final 11 minutes. The Red Bulls finished with 10 players after center back Chris Duvall, who struggled for most of the afternoon, was given his marching orders for a hard foul on Andrea Pirlo in the 79th minute.

In a game quite reminiscent of their 7-0 thrashing of New York City FC at Yankee Stadium earlier this year, the Red Bulls showed their cross-river rivals who was the boss at a hot and humid Red Bull Arena Sunday afternoon.

Dominating the match from start to finish, the Red Bulls registered an emphatic 4-1 victory over their archrivals in the latest edition of the Hudson River Derby before a sold-out crowd.

The Red Bulls won the regular-season series, 2-1, and have emerged victorious five times in the six meetings between these two rivals since it began last season.

Wright-Phillips (20th and 70th minutes) matched his two-goal performance in that May 21 rout in with another double. Kljestan was in the middle of three goals, scoring once on a 41st-minute penalty kick and setting up two others. Ronald Zubar (23rd minute) also tallied for the hosts. McNamara had a goal for City in the 43rd minute.

“Obviously for the fans and for us, after the game, it’s nice, it’s almost a party feeling. More than that, it’s three points, we have to stay in touching distance of that team,” Wright-Phillips said. “You have to give it to them, they’ve done very well this season. They’re a good team.”

Despite the result, City (9-7-6, 33 points) remained atop the Eastern Conference while the Red Bulls (31) jumped from fourth to second place as they evened their record at 9-9-4.

It certainly was a contentious, physical and passionate match as referee Mark Geiger issued eight yellow cards, all but one in the second half, a red card to red card to City defender in the 89th minute for fouling Gonzalo Veron — and dismissed City head coach Patrick Vieira late in the first half.

Vieira spent most of his post-game press conference railing about Marsch and his pre-game conduct.

Earlier in the week, Marsch told reporters that he felt his team hadn’t fared well with game officials this season.

“The frustration that we have with the referees, the way we feel we don’t get the benefit of the doubt,” he said, adding that his team has received only “one penalty call all year. That frustration continues to mount; the frustration we have on the referees.

“We have an honest team … that gets punished for calls, plays and penalties across the board and we hardly ever get rewarded.

“Hoping that we get a ref who understands how to ref the game this weekend.”

Not surprisingly, Marsch was fined an undisclosed amount from the league.

After the game, Vieira felt that Marsch was “crying” about the officiating, setting up Geiger to make calls toward the Red Bulls.

“When you put in a question mark on the referee’s credibility before it begins, that can have an impact, and I think you will agree it had an impact on the referee’s performance today,” he said. “And I feel sorry because we came here to play a good game and to play a Derby game, and Derby game sometimes, yes, the tackle is late, but I don’t think the referee — the referee, I believe, got influenced by the comment during the week.”

Vieira never got an opportunity to see the entire game as he was dismissed from the sidelines by Geiger during a water break in the 34th minute after he stepped outside of the coaching box.

On the way to the tunnel, Vieira had a verbal confrontation with Marsch on the field.

“The conversation to Jesse was just to stop crying and stop complaining,” he said. “I think his team was playing well, playing really good. but it was quite really frustrating and I feel sorry for him.”

Vieira claimed that Marsch had this planned for a while.

“This is a plan,” he said. “This is a way, I think, he wanted to go for, and he get fined for it. So that means he did some things wrong. You wanted to accept it or not, but that had an impact on the referee’s decision, as simple as that.” 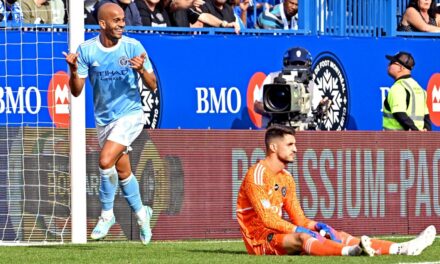 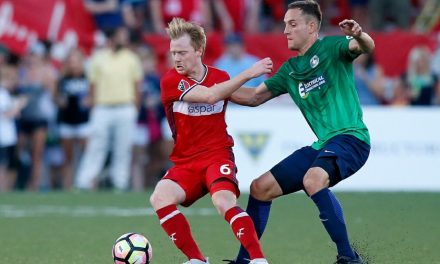